Soup in the hot summer months might seem a bit odd, but I enjoy it year round.  Samgyetang is a Korean soup that's a traditional summer dish, as it is believed to restore the body's nutrients that are lost from sweating.  Despite it's status as a summertime favorite,I first had this dish on a freezing January day in Seoul in a restaurant that specialized in holistic foods.  Carla and I didn't know this going in, only that the menu looked delicious and the food smelled wonderful. 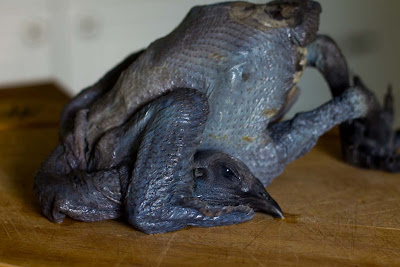 Samgyetang caught my eye on the menu because it featured a whole small chicken in broth, along with red jujube dates floating next to the chicken, like bright-red bobbing apples.  The flavor was unique...but there was something in the background that added a husky, fullness of flavor that I could not identify.  Only later did I realize this was the taste of ginseng.  If I spoke more than five words of Korean, I might have realized that samgyetang's literal translation is "ginseng chicken soup."The simple, aromatic broth stuck with me, contrasting with the savory chicken, the sweet and chewy red dates, and the bland sticky rice that was stuffed in the chicken, soaking up all the rich flavors.

Now, as the days reach 80+ F here, I thought this would be the perfect time to revisit the dish.  It's an easy dish to make - simmer a broth of garlic, ginger, red dates,and ginseng, stuff a small chicken or Cornish game hen with rice, and cook till done.  For the ginseng, I didn't want to pay out the nose for pricy whole roots, so I used pure ginseng tea, which is readily available online (most local shops just had green tea mixed with ginseng). 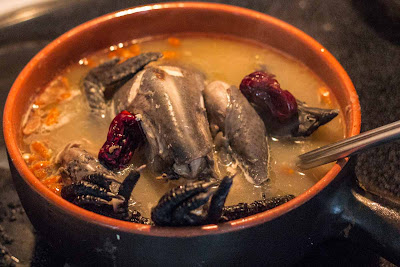 In the place of a small chicken or a Cornish hen, I used a black silkie chicken.  Black silkies are a type of bantam chicken, so they stay under 2 lbs or so once dressed.  I love the look of them, as readers familiar with this blog will have noticed their regular appearance.  Plus, they taste delicious and this soup is no exception.

Over the years I've done this blog, I've noticed a lot of traffic to my blog from people searching for "black silkie chicken extra toe."  It's true they do have a fifth toe, compared to the normal four on chickens, which can look a bit startling, but is very normal.
But I digress.  Traditionally, the Samgyetang soup bird is kept whole, to keep all the nutrients intact and boost the restorative powers of the soup.  Although I cannot speak to the curative properties, it did make for a delicious soup!  I'm curious to try ginseng in other broths, as it leaves a unique finishing note in your mouth, like a cross between ginger, horseradish, and something medicinal but not unpleasant.

I'm curious why they have this extra toe, although there's not much information on it, aside from it being considered a normal genetic trait called polydactylism.  Knowing how much time has gone into breeding specific traits into chickens, I'm curious if this trait was something man bred into a standard feature for silkies. I have read that rooster silkies were used in cock fights and wondered if an extra claw/gripping finger was bred to give these birds an advantage in a fight. I don't have any proof or research on this theory, but it has crossed my mind that the birds were bred for this trait.

Actually, the black silkie is a linear descendant of the neandervelociraptor with its prehensile polydigital clipstone appendage. Yes, it certainly was handy to seize prey and finish them off quickly; but it was also used to trim the end of celebratory cigars in lieu of a victory dance which came to be viewed as ostentatious and garish.