On a recent trip to the Pittsburgh strip district, Carla and I picked up another little Black Silkie Chicken. Despite not having a great deal of meat on its skinny frame, we loved the flavor of the chicken and the rich taste it gave to our noodles. This time I wanted to try to up the volume on my initial recipe. I cut out the spine and flatted the bird out onto a baking sheet, then roasted it for 20 minutes at 425 F. This cooked the small bird most of the way, and brought a nice roasted color to the bones. I separated the meat from the bones, then put the bones into a small pot of water for a light silkie stock with star anise, black pepper, and cubes of fresh ginger. 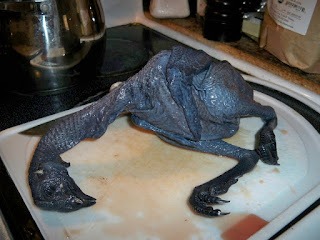 After this cooked for about 30 minutes, I brought another pot to boil and added two bundles of buckwheat udon noodles to simmer. They only took about 3 minutes to cook, so I added the par-roasted chunks of silkie meat to the bubbling broth to finish cooking. Out came the bones, in went the meat, and dinner was almost ready. I topped the noodles with silkie meat and broth, bamboo mushrooms (also called bamboo pith), wilted spinach, and fresh scallions. 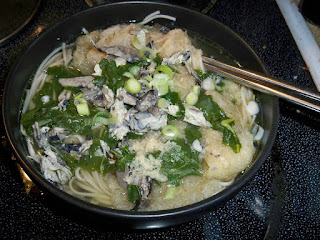 In a way I liked this even more than my first silkie dish, as I thought making a "quick stock" helped to really bring out the flavor of the bird. Plus I really liked the wispy texture of the bamboo mushrooms. Here's a less-than-flattering close-up: 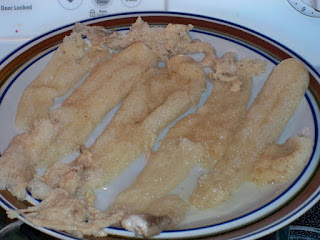