I really believe we eat with our eyes first. When food looks beautiful, or unique, it really gets your appetite going. I also have the bad habit of shopping with my eyes. Purple potatoes, orange 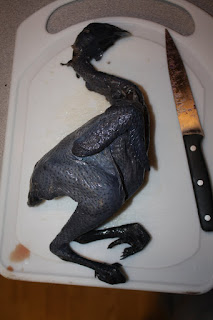 cauliflower, white peppers, black garlic; an impulse buy is so easy when something is a cool new color. So when I saw the Black Silkie Chickens on last season's Top Chef Masters, I knew I needed to try it.

Silkies get their name because they look like a stuffed animal charged with static electricity. Their soft, silk feathers, puff up off their bodies in a soft, pillowy plume. Their feathers might be white or black, but their skin, meat, bones, and ligaments are all black. Well, the meat is a greyish color, to nit-pick. They're classified as a batam chicken, which means they don't get much bigger than 2-3 lbs. Also, food writers likes to tout that the breed has one extra toe than "regular" chicken breeds, but I don't think people are buying them because they have a spare pinkie. 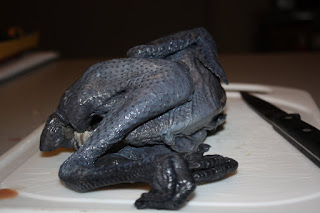 This silkie came frozen from Canada, where it was slaughtered by Buddhists, exempting it from USDA inspections. That's about all I could glean from the packaging. Being so small, you don't get a ton of meat off the bird, so they're normally made into soups or stews to spread out the meat. I quartered the bird, then roasted the carcass and wings. The roasted carcass, leg bones, and neck were simmered in chicken broth to build up the body of the soup. I added some star anise and ginger for flavoring, along with a small amount of dried chilies.

Mixed into a soup of buckwheat noodles, savoy cabbage, carrots, and scallions, the tiny black chicken went a long way. The chicken didn't taste much different from a high-quality free-range 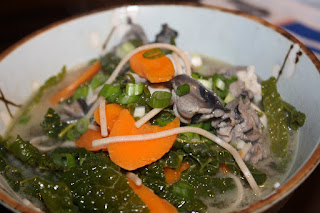 chicken. It was good, but you're paying for the striking color.

I think I wouldn't mind raising a few black silkies, mixed in and among "traditional" meat birds, but I don't think they would go beyond being the occasional novelty on the dinner table. Speaking of, silkies are valued by poultry farmers because of their strong mothering instincts and tendency to brood. They'll try to hatch any egg they find, from their own, to a chicken, turkey, or quail egg. Now that's more interesting than an extra toe.
SHARE SHARE SHARE