Sometimes a landmark experience can be a pleasant surprise. The cheese Epoisses is considered to be the stinkiest in existence. Carla and I have found it to be a yummy bundle of gooey cheese wrapped in a stinky skin. But 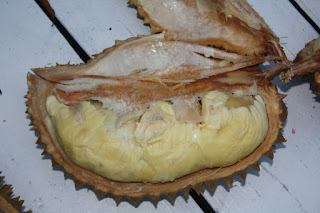 sometimes, no matter how excited you are to try a new food, you just hit a brick wall. Like with Durian fruit.

Lotus Foods in Pittsburgh's strip district was selling the Durian in their produce dept. I had read online that most Durian are exported frozen, then thawed at the market. When we picked our up, it was still frozen solid and didn't have much smell. After it had defrosted for a day on top of the refrigerator, it had only a mildly funky aroma. That all changed when I cut it in half.

Have you ever heard why we get carsick? It was explained to me that your mind knows you are sitting still, while the balancing organs in your inner ear register the car's momentum. You're moving, but sitting still. This disconnect between your mind and body results in nausea. That's what the durian was like. The smell was a pungent bodily odor, with the smell of fetid fruit that had been forgotten and left to rot. Inside the bark-like husk were three large chambers, each holding three ivory pouches of fruit. They were firm, plump, and had a slightly stringy outside 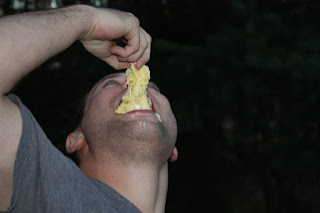 They tasted surprising sweet. Although sweet isn't the first thing I noticed When I took a small bite, the inside burst through with a marshmallow-like custard. Holding it next to my mouth, it was hard to deal with the intense smell and cottage cheese texture at once, so it took a few more nibbles to notice the sugary flavor.

The finish was all broth. Savory, meaty broth, like French onion soup. And some more stink. It was almost sensory overload. A repulsively pungent smell, in a stringy, creamy glob, with a sweet, fruity flavor, and the umami-like flavor of caramelized onions and roasted beef. As you might guess from the photo, Matt, Carla's brother, had a much larger serving than anyone else.
SHARE SHARE SHARE

To be honest, I've never seen a Gaperon in the US that wasn't overripe and terrible smelling.

Dont let them defrost so long; just a couple hours. Try eating them while they are still very cold If not just a bit icy when you first cut into them.

I'll keep an eye out for them, but I've mostly seen them already defrosted and at room temp. But I'm guessing even then they might have some frozen in the back? Thanks for the suggestion!