When bread making was still a routine part of daily life, one of the housewife's chores would be to tend to the needs of the yeast. In the 18th century and before, there was no difference between brewer's yeast and baker's yeast. In some countries, brewers had the price of the yeast set by the government, so they could not overcharge customer for this household staple.

Along with making bread, many households also made their own beer and cider. Bottle-fermented beer was another regular source of yeast for the house. The yeast sediment that settles to the bottom of the beer bottle, where it could be poured off and fed flour and water to create a baker's starter. Now, before the advent of refrigeration, the yeast starter was subject to spoilage during the heat of summer. Something I found interesting is that older recipes would suggest adding hops to prevent the yeast starter from spoiling. Just like with beer, the alpha acids in hops would prevent pathogens from taking up residence in the yeast starter.

I was curious how well this would work, so I poured off some of my sourdough starer into a mason jar with a few cones of dried cascade hops. I left this on the counter during a 10 day stretch of days in the high 80's to low 90's. As we don't have air conditioning at home, the yeast was 75-83 F. Aside from having to swat away a lot of fruit flies, the jar seemed fine. When it was time to bake, I picked out the largest hop cones, but knew there were some stray leaves floating about in the bread starter. 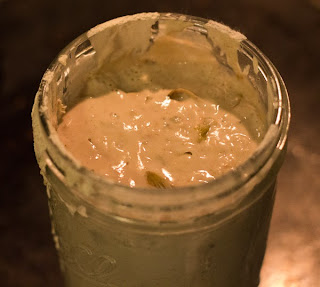 This loaf was made with the hop-infused bread starter, 3 parts white bread flour, 1 part whole wheat, and 1 part rye. Upon tasting the bread, I couldn't believe how strong and intensely bitter the hops were. But on my second slice, they were oddly mild. For whatever reason, the hop flavor is strongest in the crust.  I'm not sure why, but it does remind me of how hops always taste strongest in the foam head of a beer. The soft interior of the bread was much milder, but still carried some of the piney hop bitterness. 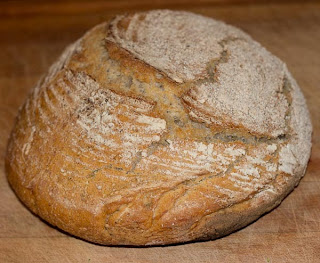 I enjoyed this bread, especially with sharp condiments, like pickles, sharp cheese, cured meat, and mustard. The bitterness still surprised me, so I looked back at the 1858 recipe from Lledr Cadog (reprinted in Elizabeth David's 1977 “English Bread and Yeast Cookery”): “[use] 2 ozs of the best hops, choose yellow hops,” it read. Yellow? Then it hit me, when hops are fresh, they keep their natural green color. But yellow hops would mean they were older and stale. They still maintain their antibacterial, preservative qualities, but don't have the strong hop bitterness or aroma.  So this would have made for a milder-tasting loaf. Stale hops are actually traditional in a few beer styles, where the bitterness of hops isn't desirable, such as lambics.

So, like everything, the good God is in the detail.  I'll make this loaf again, but I'd like to try it using some old yellow hops I've been saving for a Flemish red ale.