After a few months of aging, then a day of smoking over alderwood, followed by a few more months of aging, my Kindziuk was ready to try.  A Polish and Lithuanian cured meat, Kindzuik is like a very coarse salami, where whole chunks of beef and pork are stuffed into a casing, cured, smoked, and cured longer.  The intensive drying and smoking procedure (and a slightly higher salt content than most salami) makes this a very sturdy cured meat, one that can last a long time. 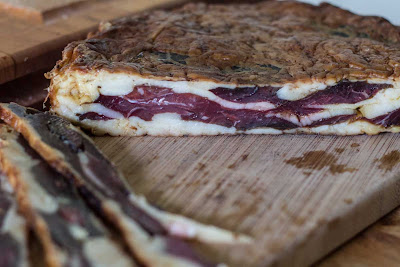 Normally cured in a pig's stomach or bladder, I wrapped my Kindzuik in two layers of caul fat.  Cutting into it, I wondered if the caul fat provided enough "insulation" to the meat to keep it from becoming overly dry during the long drying process.  Slicing into it, I was rewarded with soft, rosy beef marbled with slices of pork fatback.  This was my Kindzuik that I pressed between two wooden boards, (similar to how they press sopressata), so it had a very wide, flat look.  The pressing also made for a nice, tight binding between the different chunks of meat, so I didn't have the problem of separation like I did with my first coppa.

Having tried a range of French, Spanish, and Italian-style cured meats, this tasted like nothing I've had before.  The alderwood added a light smokiness, but nothing as heavy as hickory, oak, or mesquite.  The Eastern European spices also added a slightly exotic flavor to the meat.  I used marjoram, mustard seed, caraway, bay, sweet paprika, white pepper, and allspice, which gave the Kindzuik an aroma of warm spices and a deep, savory flavor.

For being so different from anything I've tried in the past, I'm so happy this turned out as well as it did.  It gives me a lot of confidence as well, as I had a few major setbacks in dry curing meat (the separating coppa, the overly-hard lamb salami).  But I think I'm beginning to develop a solid skill-set in curing meat, and those mistakes were good learning experiences.  Now I can't wait for the cold weather to come back so I can try to improve over last year!
SHARE SHARE SHARE