Last weekend I cut into my large coppa, which was stuffed into a beef-bung.  It was a mix of emotions, both enjoyment and disappointment.  This was the first sausage I’ve cured with large chunks of meat (2-4”) and I was very curious to see how it came out.  Most smaller salami can be checked for “doneness” by giving them a squeeze and seeing if they feel firm and dry.  Wet or soft to the touch means they need to dry and cure longer.  You can also weigh them, to see if they’ve lost 30% of their original weight, which is a good sign they’re now in a microbial-stable state.  But with curing a large salami, or a whole ham, you may want it to age further, to help develop the flavor.  To test this, you use a very cheap, simple tool; an ice pick. 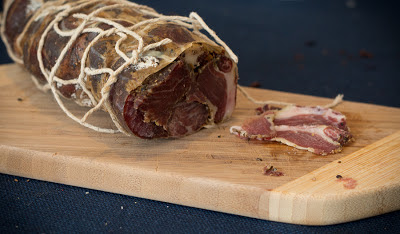 Jam the ice pick into the meat, then quickly remove it.  It should have a clean, savory aroma, with the sweetness of cured meat to it.  I’ve always found this to be a cool “trick of the trade,” similar to the way they test 80 lb wheels of Parmigiano Reggiano by striking them with small hammers and listening for sounds that might indicate gaps, faults, or air pockets.

So while the coppa carried the rich, cured aroma I was looking for, cutting it was a bit of a disappointment.  The meat was well cured, with a rosy color and intense flavor.  But the chunks had not knitted together.  You could pop them apart, like puzzle pieces of pork. 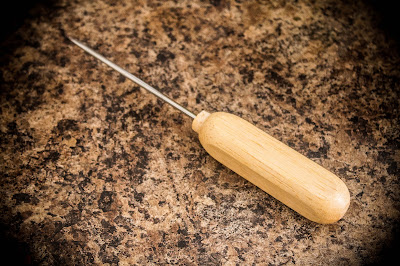 It is a poor workman who blames his tools, so I am blaming the recipe.  In Rulhman’s Charcuterie, he says to simply stuff the chunks of meat by hand into the casing.  If you do that, I don’t see how you’ll ever get a salami with a close-knit texture.  Now, going off the Marianskis’ Home Production of Quality Meats and Sausages, I realize I should have mixed the cuts of pork, just as I would normally mix the ground pork for any other dry cured salami.  The vigorous mixing and tumbling will produce a sticky exudate of myosin protein on the surface of meat, making the pieces bind and join together as they dry and cure.

Although it won’t win any awards in the looks department, I’m still very pleased with the taste of this salami.  It was also a good learning experience, and I still have the enjoyment of knowing I took raw meat and made it safe, edible, and tasty with salt and time.
SHARE SHARE SHARE

Traditional coppa is made from a one solid piece of muscle from the pork shoulder. Check out this blog and it may answer some questions.

Ha! That's funny - I've actually spent more hours than I'd like to admit. I've always wondered if the author of that blog was related to the founders of Molinari Salami of San Francisco. But my guess is probably not, as it seems like a common surname.

Thanks for your comment - to be honest this is a project that still confuses me. The initial recipe from Ruhlman, seemed straightforward enough, but I really don't think it's a great recipe, coppa or not. But then in his second book, Salumi, he makes no reference to this coppa recipe, and just focuses on traditional coppa made from whole neck muscles. You'd think he'd make some comment like, "Hey, ignore that first recipe," but instead he just moves forward with whole muscle coppa recipes in his new book and ignores ever having written it.

But in an odd twist, he actually remarked to the author of the blog you posted that he got the "chopped and cubed" coppa recipe from his co-author Brian Polcyn
(http://forums.egullet.org/topic/79195-cooking-curing-from-charcuterie-part-1/page-8#entry1132680)

But in other news, I've got a traditional coppa hanging upstairs now, which I have much higher hopes for!

Yes, I was confused when reading Ruhlmans recipe as well. I've actually read quite a few blogs where people tried his recipe and none were too pleased with the outcome. How do you like his Salumi book? I've been thinking about ordering it.

I just picked up a 20lb pork shoulder yesterday and getting ready to start my coppa and Spanish chorizo! Hooray for cured meats!!

Also, love your blog! Keep up the good work

Thanks so much! Despite my issues with this Coppa recipe, I still like Salumi. Some people complain that it's too much of a one trick pony - a few basic recipes and then a lot of flavor variants filling up the rest of the book.

Personally I found it to be a great document to something I've had a lot of trouble with: Italian charcuterie is called by many different names throughout italy. Sopressata is one type of salami in the North, a different salami in the south, and in Tuscany it's a fresh head cheese cooked in a beef bung.

Best of luck with your coppa and chorizo!