With my raw milk supply unfortunately dried up for the foreseeable future, I've held off on cheese making and put my energies toward a new season of projects.  Although I'm still saddened by the closing of our local dairy, in a way moving towards curing meat feels natural.  As the grass wilts and turns to a dead, dirty straw on the wet earth, the cows are moved to hay, and that makes the milk loose its fresh, herbal dimension that's so appealing to me for cheesemaking. 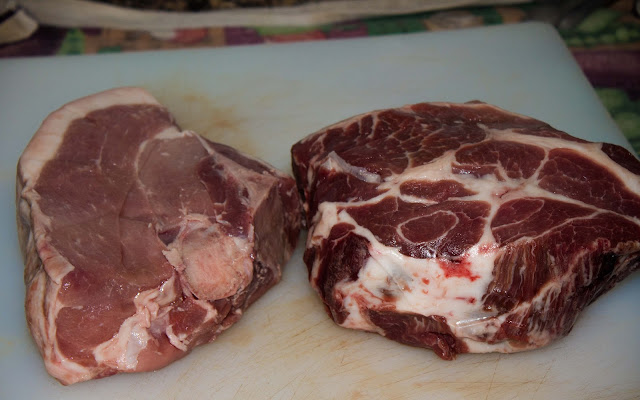 With the cold weather, this is the natural season to begin to cull meat animals; pigs, cows, lambs, goats, chickens.  And with that comes the need to preserve the meat through the winter.  So I've started back with curing meat in our back closet.  Years ago, before we started renting, the closet was being redone and most of the interior paneling is off.  Then our rental house changed landlord hands and it stayed half-finished.  But the lack of full insulated paneling makes it stay about 50-60 F in the fall and winter.  The extra humidity required for curing meat comes from some of my other "projects" in the room, such as the water in the sauerkraut pot, and a few gallon jars of homemade vinegar that are open to the air.

Curing meat worked out well last winter, so I wanted to try some new things this year.  My first plan is to try a larger diameter sausage, which can be tricky as they take longer to cure and dry than a traditional, thinner salami.

Going through my copy of Charcuterie, I decided to try the coppa recipe.  Now, many dry curing blogs argue over this entry, saying it should be called "capicola," since the meat is cut into large 2" - 3" inch chunks, not kept as a whole, single muscle.  Others say "capicola" refers to a cooked, fresh product, like a city ham or salami cotto.  I'm going to just call it "coppa" for ease of reference if you're working from the same book.

So I got these two beautiful cuts of berkshire pork from a local farm about 45 minutes south east of here.  Look at that ruby red color and beautiful marbling in the shoulder!  The other cut, with the generous ring of fat on it, is part of a uncured ham.  In France I had a really interesting saucisson de jambon, a salami made from the minced, cured back leg of the pig.  It was much leaner, denser, and more intense than a traditional salami, and I wanted to work with adding a bit of pork leg into this coppa.  Or capicola.  Whatever.  Cured pork.

Now these pig parts are in thick cubes, marinating in my fridge for the next three weeks.  Then I'll pack them into a beef bung and let them cure for 2-3 months.
SHARE SHARE SHARE