While visiting relatives in France, a major goal for me was to take advantage of all the raw milk cheeses that are not available in the U.S.  The FDA does not allow the importation of raw milk cheeses aged less than 60 days, so we're unable to get true Camembert de Normandie, Brie de Meaux, or many other young, raw cheeses.  Interestingly enough, for several years this law did not block the importation of young goat or sheep's milk cheeses, as the U.S. government's definition of cheese specified that it came from cows.  But then they wised up and clamped down on goat and sheep's milk products too.  The devil's in the details.... 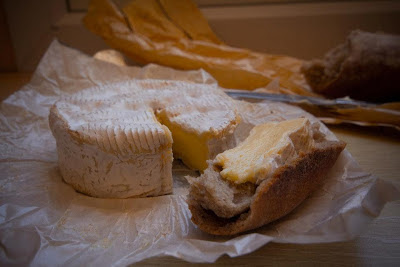 But still, here was my chance to taste the forbidden!  I was especially excited to try a raw milk Epoisses.  Epoisses is one of my favorite cheeses, and I have a lot of personal attachment to it.  Well, as much as you can for a small, stinky, gooey little cheese.  But it was the cheese I brought to Carla when I proposed (making sure it was two week's past its "best before" date, so it would be adequately pungent).  Plus it was a cheese that really made me want to get into cheese making, so I could enjoy my own raw milk Epoisses-style cheeses at home.

So once in France, I began my search for a raw milk Epoisses.  In the meantime, I came across great raw milk Camembert de Normandie AOC.  This was a perfect cheese - the inside was a bit runny and supple, but still with a youthful, fresh flavor and long woodsy, mushroom flavor.  It was simple, basic, and absolutely dead-on.  And I bought it at a shop across from my hotel.

It wasn't towards the end of the trip that I finally found and tried a raw milk Epoisses.  This was in a very classy cheese shop in Paris, where the maitre-fromager showed me how to pick out the best, ripest one.  And it was just ok.  But when you look forward to something for months and make a concerted effort to realize your goal, well..."just ok" is kind of a disappointment.  I expected intensity, salinity, and farmyard beefiness to be exploding from this cheese in every bite.  And while the texture was nice, the flavor was two-notes: salty and sharp.

Today, my memories focus on the Camembert.  A milder cheese, without the trials and tribulations of the Epoisses attached to it, but perfect.  Having worked with artisan cheeses for going on seven years now, I understand small-batch cheeses can be unpredictable and temperamental.  But there's still something to be said for the little Camembert, and the comforting taste of being consistently perfect in its own way.
SHARE SHARE SHARE