I found an old Pennsylvania Dutch recipe for what has to be the oddest titled cake ever: Milkless, Eggless, Butterless Cake by Edna Eby Heller. I know the PA Dutch are known for their frugality, but this seemed to be pushing it. The cake was known as a boiled cake, which is an odd technique of boiling the fat, sugar, spices, and water/milk together before mixing with the flour and 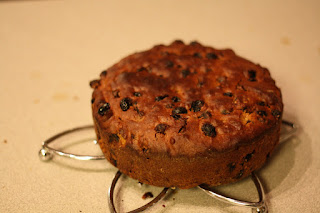 leavening. Normally these cakes have a large quantity of dried fruit in them, which is boiled along with the rest of the mixture. I'm not sure, but I think the boiling is used primarily to plump the dried fruit. I don't think it's for raising the temperature of the initial batter, as most recipes indicate the boiled mixture should be cooled before being added to the dry ingredients.

The PA Dutch recipe only had raisins, so I made it a bit more festive with half dark raisins and half golden raisins. Instead of butter, the recipe asked for lard, which I substituted with goose fat, as that's the only animal fat I had on hand. Spices were also minimal; cinnamon, cloves, and nutmeg. Add in the flour, salt, and baking soda and that's the cake. Bake for 40 minutes and you're done. Easy peasy. 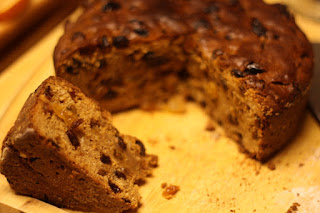 Honestly, it was really good. Carla described it as a giant raisin cookie, shaped like a cake. It tasted pretty close to a dense fruit cake. If I splashed brandy over the top I think it would have a good chance to pass as a traditional Elizabethan fruitcake. You didn't get any "animal-esque" flavors from the goosefat, as it's about as neutral as lard. While not dethroning my favorite Pennsylvania Dutch dessert, this one's enjoyable enough to qualify for a repeat.
SHARE SHARE SHARE

"as that's the only animal fat I had on hand"

Must be sad times when there is only one animal fat on hand. That's like you having only one red wine vinegar on hand.

Boiled Cake is so yummy - this recipe is almost identical to my moms.