It's funny the conversations that flour and molasses can start. In rummaging through my cupboard for a pot of dark honey, I found I had two full bottles of molasses just idling about. Clearly these ingredients needed a workout. I'm 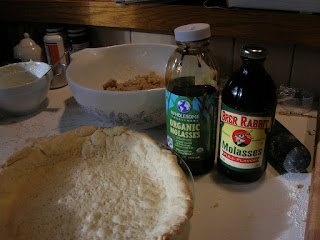 planning on curing part of my next hog belly with molasses for some blackstrap bacon, but that might be a few more weeks off. I was in need of a pie however...

When I was in college, the local farmer's market had several Amish families, some selling veggies and the others selling pies, pastries, and bread. Many of them offered little black pies with crumb toppings called "shoofly pie." The origins of the pie had two stories: Being made primarily of molasses, the cook had to continually shoo flies away from the sweet and gooey center. The alternate story was that since the pie was primarily made of molasses--a cheap ingredient--it was used to lure the flies away from the more "important" fruit pies.

"And that's why we need empirical research!" my brother Steve exclaimed, when I related the story to him while making the pie. "Too many times a phenomenon can be explained with multiple, conflicting explanations, even if they all logically make sense. We need to eliminate those types of conflicts to get at the root cause of an event." At this point, I realized I was on to a pretty potent recipe, one that could easily still men to arms and talk of rebellion. I soothed my 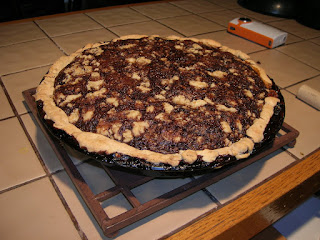 brother with a response that our species' collective unconsciousness did allow for a relativist's view of the world and went on with my recipe.

Think of a shoofly pie as a cobbler baked into a pie shell. With the best of cobblers, the crumb-and-butter topping stays crispy, even as the bottom becomes tender and moist through its contact with the fruit filling. With shoofly pie, you replace the fruit with a blend of molasses thinned with water and lightened with baking soda and a beaten egg. To give the bottom a bit of authority in reigning in this black and sticky mess, I blind-baked a pie shell to hold all the molasses-y goodness in. So now the runny molasses filling is poured into the pie crust and a crumble topping of flour, brown sugar, and butter is spread over top.

Much of the topping will sink into the pie, which is ok, as it will help add additional body to the pie. Baked to gentle firmness, the resulting pie is everything you want out of molasses without the sludgy bitterness: smokey, sweet, with an intense caramelized sugar flavor. The texture was soft and chewy, not runny or saccharine. For a pie made of such basic ingredients, this is really a dessert with depth of character. A perfect example of becoming more than the sum of its parts!
SHARE SHARE SHARE