Bread with the Lahey Method

It's rare to find a really exciting new technique in the kitchen. Most of my enjoyment comes from learning old techniques that have fallen out of favor for the sake of convenience. And aside from molecular gastronomy adding liquid nitrogen to ice cream and transglutaminase to pureed meat, when is the last time you learned a practical, new technique that hasn't been around since Escoffier? 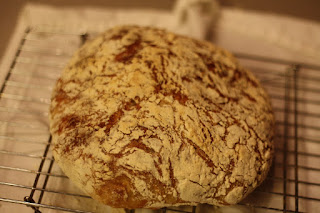 But Jim Lahey, an Irish New Yorker obsessed with Italian bread, has done just that. Lahey has become the champion of a true no-knead bread, which is served up en masse at his Sullivan Street Bakery in NYC, on the tables of many restaurants smart enough to wholesale from Lahey, and in more and more homes as people read his cookbook, My Bread. Even my revered Jeffrey Steingarten loves his bread.

And it does work. Take super-wet dough (flour, yeast, salt, and water), stir it together to mix into a ball, and let it sit for 18 hours. When you preheat your oven, put in a large metal pot, like a cast-iron dutch oven or a steel soup pot with a lid. Dump the dough into the hot pot and bake with the lid on. The pre-heated pot acts as a mini oven, speeding the dough's cooking and 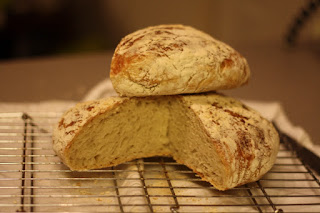 trapping all that water in the dough. The water turns to steam, filling the air of the pot with tons of humidity so you get a chewy, fluffy loaf.

But what I find so cool about his method is the "how" behind the no-knead technique. Previously, I wrote off any no-knead bread recipe as a good way to make a crappy loaf of bread. But Lahey's technique works because of the 18 hours of fermentation and the high water content. Flour will try to produce gluten on its own, but it needs a lot of time (thus the 18 hours). But it also can't move on it's own, so you can help it by giving it a medium to move through (the water). So with the high water content, it's easy for the gluten molecules to align and form the chains that will become a sturdy, bready framework. And that water serves a double purpose by becoming the steam that helps puff the dough in the oven. All you do is mix the dough together enough to blend the water into the flour - less effort than making brownie mix.

And finally, the bread tastes great. Carla thinks it's ones of my best yet, next to my Rye 'n Injun Bread recipe that I ripped from Zingerman's. Googling "Jim Lahey + bread recipe" will give you a detailed recipe, but honestly it is simplicity itself. Delicious simplicity.
SHARE SHARE SHARE