December is a busy month for me, so I usually load up the freezer in November in case I don't have time to go shopping. Afterwards, I need to find a use for all the random odds-and-ends I didn't get around to cooking. This past weekend I decided to use up a bag of five pig ears that was still hanging around. 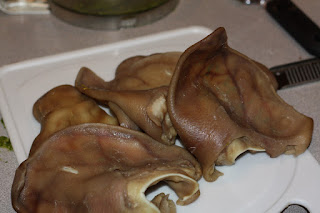 Brawn, also called Headcheese, is like a pate, but rather than filled with pureed liver, headcheese if filled with a thick, gelatin-rich broth that sets to a firm jelly when chilled. This gelatin holds a matrix of the various meats from a pig's head, including the cheeks, tongue, skin, and ears. Since I wouldn't be using a whole head, I put in a set of pig trotters to ensure the broth would be set into a firm gel. 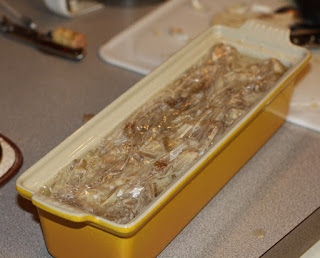 So in with the ears and trotters, I added a chunk of pork belly, carrots, celery, and onions. The broth simmered for two hours, then I strained the broth and set aside the meat. To condense the gelatin I reduced the broth from 5+ cups to just shy of two cups. As this simmered away, I shredded the meat from the feet and sliced up the ears and belly. Spiced with red wine vinegar, ground nutmeg, white pepper, and garlic, the meat was packed into a pate mold and topped up with broth.

The next day, I removed the brawn from the fridge and checked that it was set into a dense mold. To serve, we ate the headcheese with pickled Jerusalem artichokes and Triscuits. The rich jelly was nicely offset by the crunch of the pickles and crackers. Also, the sharp, vinegary pickles helped to lighten the fattiness of the pork skin and belly. 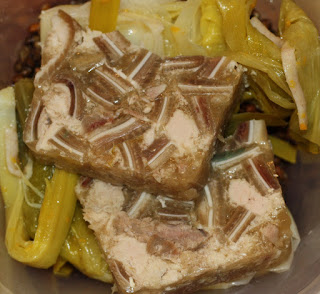 If I were to make this again, I would make it with less ears and add in a tongue or more pork meat. Although it tasted nice, I think a texture other than jiggly jelly and crunchy ear cartilage would add more interesting contrast to the brawn. And I think mixing parsley or tarragon into the meat before setting in the jelly would add a nice herbal freshness to the dish.
SHARE SHARE SHARE