Sure, Salt: A World History by Mark Kurlansky came out nearly a decade ago, but I've been busy. But as someone who's favorite past times make great use of salt (cheese making, pickling, and curing), I knew one day I would read it.  This past August I finally got the chance while away on vacation. 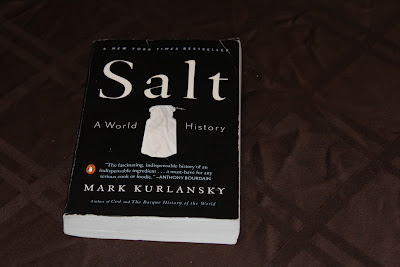 Although reviewing this book might seem like a rather late-to-the-party article, especially considering the widespread praise and publication this book has seen, I felt I needed to.  I loved this book, reading about the struggles to provide salt, and reading about just how crucial salt was in so many societies (and the cause of multiple wars and revolutions).  I was shocked to learn just how many societies got their salt from drilling inland brine wells in marshy, brackish areas.  And then  after decades of brine pumping sinkholes began to appear across England.

But this book began to nag at me.  Full disclosure: my father taught Journalism for years, and today works to demand greater transparency in the natural gas drilling sector (www.spectraenergywatch.com).  Both my brothers are doctors in research fields, and my wife is working toward her doctorate.  So I know the importance of citing your work, and citing it properly.

Mark Kurlansky doesn't cite anything in this book.  He has a multiple page bibliography broken up into the useless sections of "Salt History," "Food and Food History," "Science and Science History," and "Articles."  Each sections creates dozens of sources, but you never know where the various facts spread through the 449 page book come from.

Secondly, I feel like his book was an accurate history on the role of salt in human history.  But when Kurlansky touched on topics I know intimately, he got some major details wrong.  On page 97 of the Penguin paperback edition, he writes "milk coming in contact with an animal skin soon curdle."  He's talking about milk reacting to the rennet, but that's from the stomach linings of calves and lambs.  Not just any old skin.  He later expands upon this point and mentions rennet later, but it was the first in a series of troubling statements.

On page 400 he seems downright freaked out by the concept of salt licorice, and doesn't seen to understand that the Scandinavians used ammonium cloride-based salt licorice (which immediately opens your sinuses) dating back to when licorice candy was used by apothecaries for treating colds.

My last major quibble I unfortunately can't find the page number for, so I'm going to pull a Kurlansky and just not cite it.  I'll paraphrase, too.  He was talking about the use of sodium nitrite and how there are health concerns associated with it, but no one stops using it, "for the questionable end of making ham pink."

Well, the reason why sodium nitrite is used in hams and bacon and other smoked meats is to prevent botulisim.  Botulisim thrives in wet, oxygen-deprived environments....like inside a ham put in a warm smokehouse for hours or days.

So these are small issues, but they're cracks in the foundation of his authority on the subject.  Do I recommend this book?  Yes, I found it to be a fascinating read, and independent research has confirmed some of what I've been spurred on to read up on my own.  But still, read this book with a grain of salt.
SHARE SHARE SHARE

One fascinating bit of information in Kurlansky that was new to me is that the Celts and the Gauls were the same people. Given Nick's warning, I have since checked that with multiple sources and it is correct.

And they were not only salt miners across the globe, they were hell raisers. For the record, Kurlansky states:
“In 390 B.C., the Celts sacked Rome, having traveled eighty miles in four days on horseback in an age when western Europeans had not seen mounted cavalry. They terrorized townspeople with their heavy swords and loud war cries. The Celts controlled Rome for the next forty years, and in 279 B.C., the invaded what is now Turkey.” [pp. 54-55 in the book Salt]

The sack of Rome is also confirmed in Peter Wells' book, "The Battle That Stopped Rome."

Because of that, Wells notes: “This experience also created in the Roman mind a fear of northern barbarians that loomed large in Roman thinking and action over the next eight centuries.” [p. 127]

Hi there, the October edition of Books You Loved is live. Here is the link Books You Loved October Edition Please do pop by and link in a post about a book you loved. Maybe this one? Cheers