A few weeks ago Carla and I drove to the Outer Banks of North Carolina to vacation with 9 of her childhood friends and their significant others.  Along with getting to eat some really great, fresh fish, I think one of the highlights for me was getting to bake a number of breads.  Normally, I just bake one loaf a week, as Carla just likes one slice, as soon as it comes hot from the oven.  Then I slowly go through the rest as my morning toast.  But with 11 people under one roof, I could bake a loaf a day and not worry about filling up the pantry with piles of slowly aging bread. 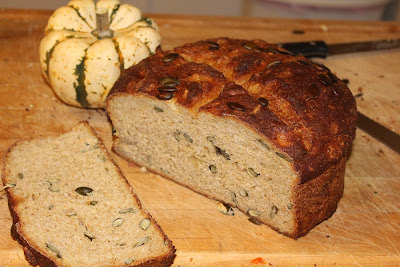 Along with some basic sandwich loaves, and the slightly-gummy cornmeal and wheat loaves I love for sopping, I think the biggest hit was my sourdough bread.  For the last few months I've been using King Arthur Flour's New England Sourdough Starter.  The starter comes to you in a small jar that looks disconcertingly like some type of specimen sample.  Feed it with flour and water, and in a day or so you've got a bubbling, percolating mass of doughy, sour goodness.  I actually started mine in summer and the warmer temperatures encouraged the yeast to get so vigorous as to overflow from the 16 oz crock like a science project volcano.

I've worked with sourdough a lot, including cultivating my own wild sourdough three times:
1.) with potato
2.) with grapes
3.) with rhubarb

Each recipe worked, but as time has gone on, I think the end results are very similar in producing a sharp, acidic sourdough.  But why would they be any different?  The real flavor comes from the wild yeast in the air, not from the vegetables and fruits I use to feed them.  So since I've always made sourdough in roughly the same area of Pennsylvania  I've always been pulling from the same colonies of wild yeast.

But on tasting the New England sourdough from King Arthur, I really noticed the difference.  Baked in a loaf, the dough has a more husky, deep sourness than the sharp acidity I was getting.  Ultimately, I think that resonates a lot better with the earthy flavors of whole wheat and rye that I like to use.

King Arthur also has a number of sourdough recipes.  Their basic recipe is very straightforward, but wonderfully adaptable.  Above you can see a pumpkin sourdough loaf I made last night, using cooked squash and pumpkin seeds.  For my flour in any recipe, I follow the advice of Ms. Elizabeth David and make a "wholemeal flour" of 2 parts white bread flour to 1 part whole wheat, plus a half-part of wheat germ mixed in for extra texture and nutrition.  I also like to use half-milk instead of all water, as the milk helps the bread to keep its moisture a little longer.

I just liked having the "fresh out of the oven" bread on every day of our trip! Love you!