I love sardines.  Aside from tasting wonderful and being incredibly healthy, I love how portable they are.  During my busy season of work, I'll keep a case in my desk for quick meals.  During particularly busy times, I'll finish a whole case over a couple of weeks.  Otherwise, they're just waiting there in their little tins, unaffected by the pass of time, unlike most sea foods.

But then I read about French "vintage" sardines, which are cellared for years, like wines, and regularly turned (the tins, not the individual sardines).  Now, normally, I just buy a few brands of Portuguese sardines that advocate and are audited for sustainable fishing practices, but aging canned fish required a bit more research. 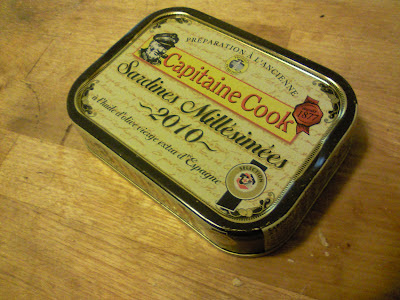 In theory, these sardines are aged with the skin-on and on the bone (which are much more nutritious than skinless and boneless sardines) and packed in olive oil.  Over the years they mellow and mature in flavor, becoming more nuanced.  So while in France, I ate my way through several tins of vintage sardines, particular this Captain Cook brand from 2010.  After a few tins, I read this Washington Post article, which has the same enthusiasm for eating sardines as I do, but also some of the same doubts.  In particular, they mentioned that many cans have linings that are specific to the food being put in them, so the metal does not interact with the food; "for example, cans used for fish must be particularly resistant to sulfur. So reactions of the foods with their containers are virtually unheard of."

So really, all you have is the fish and the oil, as the can isn't going to add anything to the fish, like the cask to wine or whiskey.  And after a few more tins, I decided that by aging sardines you're just producing a mellower product.  Vintage sardines have a soft, plump texture and mellow flavor, which I believe comes from the bones and meat slowly breaking down in the tin. Additionally, the olive oil and the oil of the fish are mixing and mellowing their various aromatic compounds with one another.  As a home canner, I've repeatedly read that older preserves and pickles will tend to a softer, mushier flavor.  This fact seems to be exploited to the benefit of the sardines, which make the little bones and spine easier to eat.  Although it's never bothered me, I can imagine many sardine lovers not relishing the gentle crunch in the center of each bite.

Zingerman's adds in the following fact; sardines destined to be aged are canned fresh from the water.  Most sardines are frozen on the boat, then defrosted and canned.  As any cook knows, starting with fresher ingredients greatly affects the final product.  Plus, since these are a "premium" product (with a premium price of $2-4 more than a regular tin), they probably get more scrutiny during the canning process, which only helps to make a better end result. 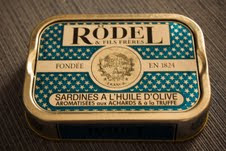 So while for my day-to-day sardine eating, I'll stick with Portuguese tins, I certainly enjoyed trying the "caviar" of tinned sardines.  And who else but the French would make a deluxe product like these truffled sardines!  Oh, mais oui!
Tweet