We got about 1.5-2.5" of snow here, which was a bit of an April Fool's day joke on everyone who decided to live in Northeast PA. It's melted down, but the weather here is still chilly. Or damp. Or damp and chilly. So I wanted a nice warming dish, and what better than some confit with lentils. It has been about three weeks since I confit-ted a piece of beef brisket in duck fat. Since then, it's been maturing under a thick layer of fat. But tonight we're cracking the seal! 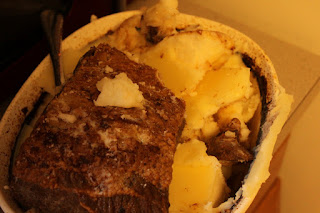 It always surprises me the intense effort it takes to free a piece of confit meat from the fat. It's like trying to pry off an octopus' suckers. But that's a reminder of why this works; the airless seal of the fat acts like a pressurized jar, protecting the meat from air and bacteria. If you don't count the hours of slow braising in molten fat, confit is a nice convenience food. Just pop it in a 400 F oven to warm it and crisp the surface, then serve on hot lentils dressed in a sharp vinaigrette. The acidity of the dressing is good for cutting the richness of the meat, so you can easily swap out the lentils for a green salad. 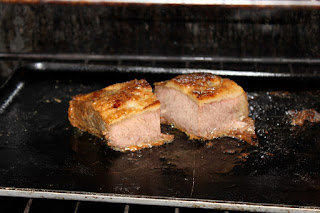 As a side, I made duck fat biscuits using the leftover fat that protected the beef during it's aging (or "mellowing") period in the fridge. They tasted good, but didn't rise to my usual respectable biscuit levels. I wonder if that's because all the water was cooked out of the confit fat, when normally the water in butter will help biscuits rise and get puffy. Or maybe it's been six months and my baking powder is dead. 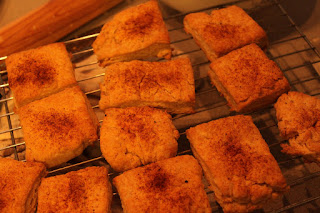 Flavorwise, I liked the beef confit, but it was rather dry. It tasted like nice brisket, but it didn't have the wow-inducing "pop" that my lamb confit did. This was a good dish, but it didn't rise to be more than the sum of its parts, like corned beef or lamb confit. So next I think I'll make something foolproof, like pork rillets. 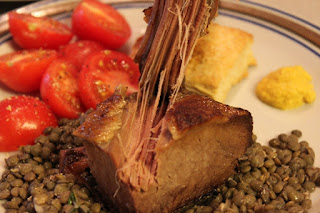