I've been reading a lot about rye lately. Rye was a major cereal grain for early farmers because it grows well in rough soil. That made it important for most of Europe when people didn't know much about land management or caring for soil. As farming improved, rye was still a staple for Eastern Europe, where the soil was inherently poor and the growing season short. That's why Eastern Europe and Scandinavia has such a strong history of rye breads and cookies. Russia even created a sweet-tart rye beverage called kvas, which is still a refreshing staple there in summertime. It's like making a low-alcohol drink out of stale bread, rather than making breadcrumbs. 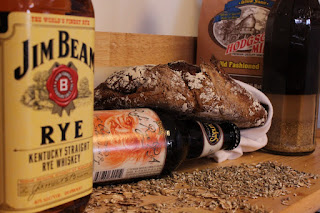 Rye's role as a food source shifted when farmers found it could be used as a cash crop for distillation. By 1700 most farms in the German Rhineland had a home still that was fed most of their rye grains. Rye was replaced by buckwheat as a cereal grain, and slowly fell to the sidelines and the market for wheat grew and grew.


I just find it so interesting that what was once a major crop has become so marginalized. I wonder if it's because people lost the taste for rye, like the move away from offal as a normal meat source. There's not a lot of information on rye's history, so I've been piecing together what I can, along with picking up rye recipes and testing them out. In the photo you can see rye bread, whiskey, kvas, beer, and some assorted rye grains.
SHARE SHARE SHARE