Octopus with Chorizo and Fresh Oregano

I saw the oddest thing on TV a week ago: octopus with boiled potatoes. It was just a glimpse of the dish, with no real explanation. I thought I saw lemon and roasted red peppers, too, but I'm not sure. It was odd, but I thought the combination might work. Taste-wise, potatoes are bland and so is octopus. Their strength is that they can take on so many great flavors with only a little effort. While they're similar taste-wise, the two couldn't be more different texturally. Boiled red potatoes are soft, smooth, and yielding to the jaws. Octopus will make you work a bit more, even when cooked correctly. So I thought I could give it a shot. 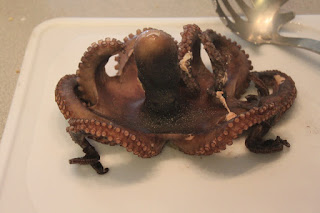 To bring the two main ingredients together, I turned to the pig. In this case I went with chorizo, a garlicky, dry-cured sausage from Spain that's flavored with heaps of smoked paprika and garlic. It's nice to eat, but really shines when diced and fried. First I simmered the octopus for an hour to make it tender. Then the octopus came out and the potatoes went in to boil. In the meantime I sauteed the chorizo to get the fat running in the pan. Before long I had a glorious, bright red sheen of chorizo fat coating the bottom of the pan. In went the roughly chopped octopus, along with a big diced clove of garlic. 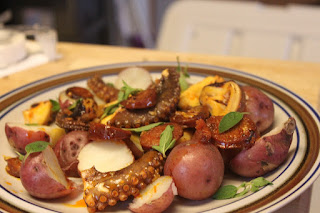 To set the dish off, I had room for one more "big" flavor. I worried the dish might be a little heavy as-is, so I went with a punchy herbal flavor. Fresh oregano is great with seafood, or dishes that need a flavor boost that you might not get with other soft herbs, like basil or parsley. 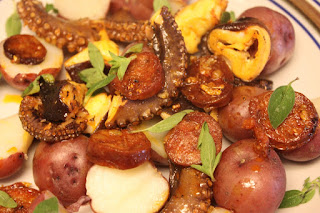 While it's not the same dish that originally got me thinking, I really like the way this turned out. Creamy potatoes, chewy octopus, all mixed up with spicy, smokey bites of chorizo and the occasional lemony/grassy smack of oregano. It's a nice Mediterranean dish that makes me wish it was actually warm enough for the first al fresco dinner of spring.
SHARE SHARE SHARE

Just make sure you get rid of the head quickly! They smell *terrible* after a few days.

Thanks for the suggestion, but I eat the head.