I first tried Bee Pollen at the Hudson Valley Garlic Festival. A local NY bee keeper was displaying racks of honey, honey comb, and beeswax, with a few odd jars off to one side that looked like they were filled with yellow, red, and orange sprinkles. I asked him what it was, to which he opened a jar and said "bee pollen, it's good on cereal." He didn't mention any of the awe-inspiring claims most people use to pander their pollen, such as the idea that humans can survive on bee pollen ("a super food") and water alone, or the rumor that Iron Curtain-era Russians fed their Olympian athletes huge quantities of pollen to crush their opposition. 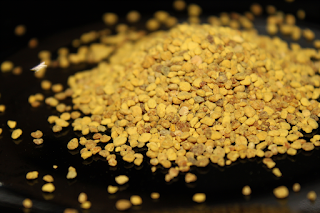 And it was good. The beeman explained that he used a device to collect pollen off the back legs of worker bees as they flew into the nest. It was "like a strip of Velcro" that lined the bottom of the entrance. As the bees flew it, the powdery pollen stuck to the "Velcro," allowing him to collect it later on. Originally, the pollen was saved as emergency rations to give the hive if they had an unseasonably cold spring and couldn't feed themselves. But then bee pollen developed its own market, appealing to both earthy, holistic herbalists and pill-popping supplement takers.

I bought a jar and was hooked. It became a staple for topping walnut porridge, yogurt, and occasional medallions of goat cheese. It might sound cliched to say it tastes floral, but considering how close the senses of taste and smell are, its not that far off as a description. Bee pollen has a dry, chalky texture, but that quickly melts into a creamy, sweet paste. Bees' roll the pollen into a ball with the help of nectar and honey, which helps accent both the sweetness and the floral flavor.

My Dad recently tried bee pollen from a local vendor, who offered him a minuscule sample with the warning that some people have an allergic reaction to it. That's because many bee's source pollen from ragweed, which about 5% of the population is allergic to. I like using bee pollen as a cool "finishing touch," especially as its an unusual product, but very easy for guests to enjoy. The one downside is that bee pollen rapidly liquefies in the presence of water, so as soon as you sprinkle it on ice cream or yogurt, you've only got about 1-2 minutes before it turns into little golden pools of liquid flowers. The good news is that it lasts for 1-2 years frozen.
SHARE SHARE SHARE

It is really best to source your bee pollen for the local as some international may not be 100% all natural.

Very good point, Madza. I've read that honey (and pollen) is best for allergies if it comes within 25-30 miles of your house. Luckily we have a bee keeper only 4 blocks over. Do you find the bee pollen supplements your website mentions are better than raw pollen?

Do you know the name of the local bee keeper? I live in the hudson valley and I'm looking for bee pollen.

Hi Elena,
I'm sorry I don't remember the name of the Hudson Valley bee keeper. This was years ago and I never kept the bottle when I moved to PA. Sorry about that! Cornell's cooperative extension may have some listings.
Nick