This might be the best bread I've made in a few months.  I picked up a large Marina di Chioggia squash from Cramer Farm two weekends ago and roasted it under wood embers.  Bruce and Diane Cramer told me this was a traditional Italian squash used for making ravioli or other filled pastas.  The squat, warty pumpkin was oddly beautiful and made me think of Autumn fires and hearty roasted dishes.  I think that's when I decided to bury it in coals. 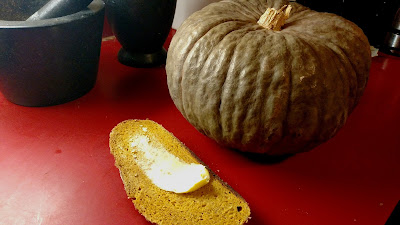 Emerging from the coffin of embers, the rough skin turned into a thick, blackened crust, while the inside stayed bright orange and very moist.  Scraping out the seeds from the steaming core, the kitchen filled with a smokey, ashy aroma, permeated with the sweet perfume of roasted squash.  Tasting a bit of the squash brought these same aromas to my palate.  My wife agreed that we had something special here, while my dog crept up to lick the last fibers of roasted squash from my fingers.

I ended up mixing a pound of the roasted squash pulp with a sourdough bread dough.  The dough didn't rise up very much, due to all the added squash, but it did have a nice little puff of a rise.  Cooked in a cast iron Dutch oven, I was thrilled to find that smokey, ashy, beguiling flavor was captured in the bread.  It's hard to describe.  It doesn't taste like "smoked bread," but something from an old fashioned hearth, where the sourness of the dough acts as a foil for the sweetness of the squash.

Now all I can think of is other roasted vegetables to add.  Fired roasted sweet potatoes, white potatoes, acorn squash, leeks, onions, beets...  Now I know the feeling Jim Lahey had in My Bread when he realized he could replace the water in bread with all types of fruit and vegetable juices for different effects.
Tweet