Last weekend I visited my parents and had a wonderful pizza made by my mom.  It was a simple pizza, but in between the pools of gooey mozzarella and garden tomatoes were large cubes of eggplant.  And not small slices, but die-sized, 3/4" inch chunks of eggplant.  Normally when I make a pizza I top it with everything sliced thinly.  Sliced mozzarella, thin slices of tomato, nearly transparent rounds of pepperoni or salami.  But these large hunks of eggplant gave the pizza a hearty, toothsome bite. 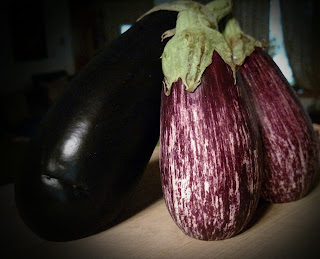 Back home, I began to think about recreating the pizza.  My mom garnished the pizza with a generous amount of toasted pine nuts.  With her pizza, my favorite bites included the tender eggplant with the crunchy, oily pine nuts.  Thinking of oil, I thought of fat, which made me think of cubes of fatty meat to contrast with the cubes of eggplant. 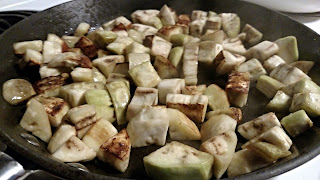 From one mental leap to another, I decided to add cubes of foie gras to my pizza.  With foie gras being so delicate, I added it right at the end of the pizza cooking on an oven stone.  Scattered around the pizza, the foie gras contracted and gave up small pools of golden oil, glistening like olive oil on a Neapolitan pizza. 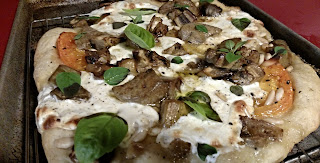 But to be fair, my mom's pizza was better.  She gently sauteed her eggplant in lots of olive oil, creating a very tender and intense eggplant "confit."  I used less oil and higher heat, which gave me pan-roasted eggplant.  My eggplant was chewier, and slightly less intense in flavor than my moms.  Also, while the foie gras was delicious on the pizza, it's bold flavor stole the show and kicked the eggplant to the sidelines.  A delicious pizza?  Yes.  But I was so enchanted by the eggplant on my mother's pizza, this seemed like a disservice to the eggplant that I was working so hard to elevate.
Tweet