Carla and I have kept our Kombucha SCOBY fermenting for almost two years now.  As each new batch of kombucha tea feeds the Scoby (Symbiotic Colony Of Bacteria and Yeast), the Scoby gets bigger, thicker, and grows additional layers.  We've given them away, eaten them plain, and still can't seem to get rid of them!  The perpetual growth of more and more Scoby's made one blogger compare it to the Star Trek episode, The Trouble with Tribbles.
So I decided to make a large batch of kombucha jerky.  Since the kombucha is waterlogged from being submerged in tea for its entire life, most recipes suggest slicing the Scoby into strips and then dehydrating it for a few hours.  This will shrink the Scoby just a tiny bit, giving you the ability to now re-hydrate the Scoby with a flavorful marinade.

I chose a traditional beef jerky marinade of soy sauce, molasses, red pepper, garlic, and some ground ginger and black pepper.  The semi-dehydrated Scoby sat overnight in this mixture, plumping back up to its original volume the next morning.  From here the Scoby is returned to the dehydrator and dried for a full day (which might change depending on the efficiency of your dehydrato) until the strips are firm and opaque. 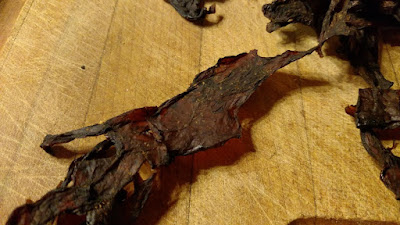 What surprised me was how dramatically the thick (3/4" at points) scoby strips shrunk down.  The finished jerky strips were wafer thin and reminded me of dried kelp or kombu.  If I had known this, I would have backed down on the amount of red pepper flakes I added, as the kombucha jerky came out very hot!  It's still very tasty, with a chewy, slightly gummy texture. 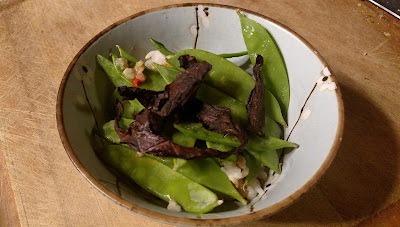 Playing off the jerky's  resemblance to kelp seaweed, I've been putting it on top of stir fried dishes.  The spicy flavor is perfect with brown rice and vegetables, added a nice textural contrast and savory flavor to the dish.  While I'll definitely tweak my spices next time, I think kombucha jerky is the perfect outlet for our burgeoning Scoby population.
Tweet