Blood Speckling in Pork vs Support of Local Foods

Today I processed three pigs, plus their heads from a local slaughterhouse. Look at these three pig heads (or don't and exit this window post haste).  On the right the skull has a clear, distinct hole from the captive bolt gun entering the skull.  The middle skull has a smaller hole, with a fracture running down the skull.  The last skull barely has any mark, with a tiny hole the size of a push pin's needle in it. 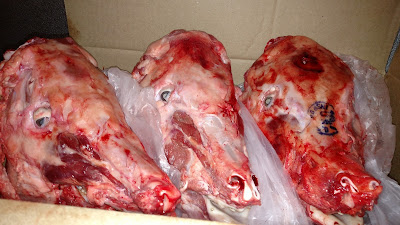 So what?  Well, this inconsistency in hitting the brain with a bolt gun leads to "blood splashing" or "blood speckling."  It's usually the result of a delay between a hog being stunned and then stuck to bleed out.  The stress of slaughter increases blood pressure, which can rupture small capillaries if the pig isn't stuck immediately to allow the blood to flow out.

""Blood speckle often extends to the hind leg where it is worse when high currents are used." 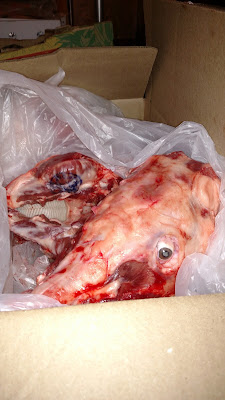 "Blood splashing is an important quality factor in pork especially for small meat processors.  Blood splashing is the occurrence of pinpoint size hemorrhages that result when small capillaries in muscle rupture because of increased blood pressure and muscular contraction. [...] the time interval between stunning and bleeding is critical.  Sticking pigs within 10-20 seconds after stunning with a captive bolt will reduce blood splashing in the muscle and may make this method of stunning comparable to electrical stunning for amount of muscle blood splashing."

So this is why the hams and loins are full of ruptured blood capillaries that discolors the meat.

Years ago, talking with the now deceased cheesemaker Eldor Hanni, he tried two of my homemade, raw milk cheeses.  He praised the first one, then tried a cheese recipe I was having trouble with.  He said my problem was too much wet acid in the cheese, then added something I have never forgotten.

Eldor said that if a customer tried my first cheese, they would love it, but if they tried the second one, they would be turned off by the inconsistency and think "spending extra money on local cheese isn't worth it."

That phrase has been rattling around in my head today.  Part of the issue is that I want to support a  local business in a difficult economy.  But another part of me is appalled that a carefully raised, heritage breed pig suffered and died in pain at the hands of a less-than-competent butcher.  I don't have a conclusion to this blog post...just nagging doubts and questions.
Tweet