While at the grocery store the other day, I came across something rather unexpected in Pennsylvania in November: galangal root.  Granted, it wasn't grown here, but it's an ingredient I've only been able to cook with a few times.  Similar to ginger, galangal is used throughout Thai cuisine.  It's stronger, and more pungent than ginger, in the way a habanero pepper is exponentially stronger than a jalapeno pepper.
Snatching up a large root from the display, the thick, overlapping bands of the galangal's skin felt like the smooth scales of some enormous fish.  Fish soup?  I thought about that idea, then remembered the beautiful orange hubbard squash Carla's mother had given us from a farmer's market.

I decided to keep with the Thai inspiration and make a coconut milk based soup.  I cubed the squash and sauteed it until it was beginning to brown.  In the meantime I peeled and chopped the galangal into large rings.  Another difference between galangal and ginger?  Galangal feels like you're cutting through a piece of wood.  It's really, really dense.  Chopping it up, the galangal released a sinus-clearing, zesty aroma.  It felt quite refreshing on a cold and frigid day.  I kept them in large rings for easy removal from the soup later, then added the sliced galangal to the pan and sauteed them along with the squash.

For the broth, I added a pint of homemade chicken stock, two cans of coconut milk, a dollop of spicy sambal chile paste, and a splash of fish sauce.  I let everything simmer for about 35 minutes until the squash was tender.  It tasted good, but it could use some added texture, so I cubed up a block of tempeh and added it in.  The soup was at a low simmer, so I just turned off the heat and let it infuse for another half hour. 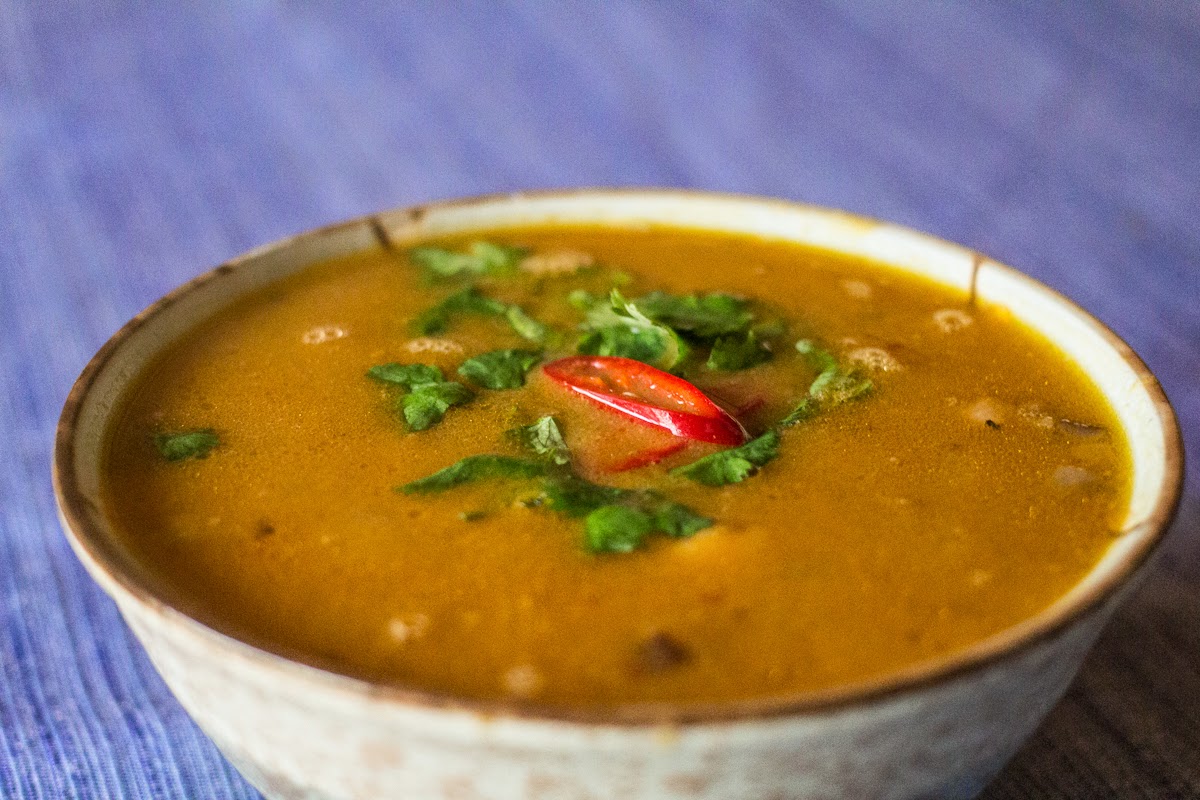 Spooning up a bowl of the soup, I garnished it with a small handful of chopped cilantro and a few slices of fresh red fresno chilies.  It was really good - rich and creamy like a classic pumpkin soup, but with bright Thai flavors of heat, herbs, and a deep savor from the fish sauce.  Carla especially liked that there were tender cubes of pumpkin and firm cubes of tempeh, as so often squash soups are pureed smooth and baby food-esque.

One note on the galangal:  while it's flavor was present, it was a bit muted in the finished soup.  I'm curious if the heat and spice was tempered by the fat of the coconut milk, or if I should have grated it for better flavor release?  I've still got a large knob of galangal left, which will give me plenty for further experiments.
SHARE SHARE SHARE