This was my first attempt at doing a 100% lamb sausage: using only lamb meat, fat, and casings.  I've thought about doing this for a while, but lamb casings cost about twice as much as hog casings, so they're a little price-prohibitive.  I'm not sure if it's because there's extra effort required to clean lamb casings, or if the fact that since they're so much smaller than hog casings, a small quantity of lamb casings requires the same amount of effort as twice the amount of hog casings. 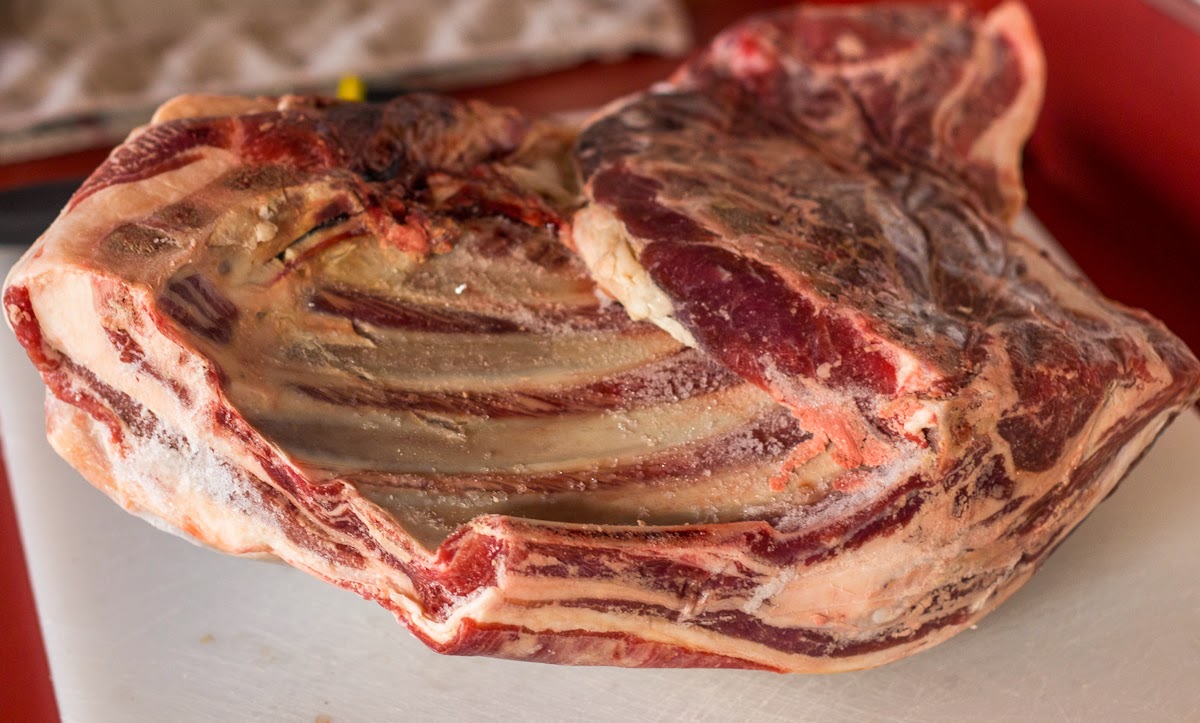 That being said, these lamb casings were a joy to work with.  It might be odd to be so excited over intestinal tubing, but these were very easy to fill, didn't burst easily, and had a delicious "snap" to them after being fried in a skillet.  Each one plumped up to the size of a hot dog, so they were also very easy to portion out.
I chose a Merguez-style sausage, as I would be working with pure lamb fat.  Lamb fat, like lamb, has a stronger flavor than pork, and many recipes recommend using pork fat to cut the lamb meat for a milder product.  Merguez is a style of sausage from North Africa (Tunisia and Morocco), although equally found in French cuisine due to some cultural exchange during the Imperial expansion of France. 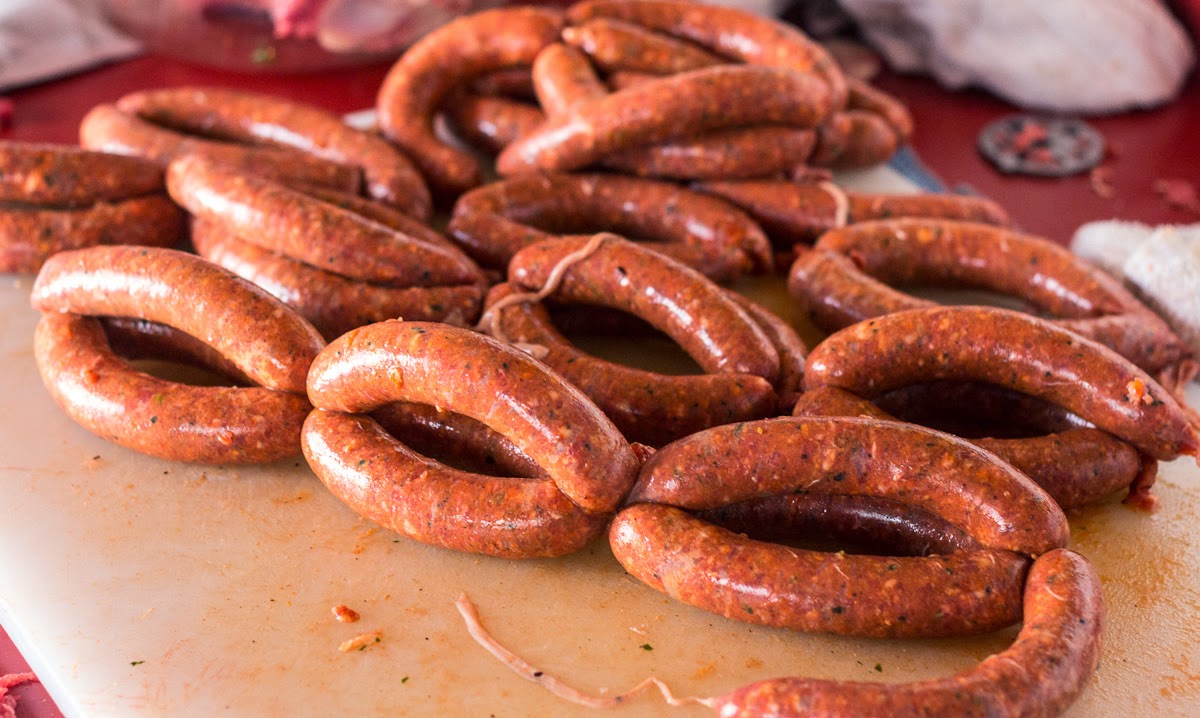 The spices for Merguez included some hot chilies, but also plenty of aromatic spices, like fennel, coriander, cumin, cinnamon, and fresh galic and cilantro.  I thought if the lamb was gamey, the aromatic spices would counter the strong flavor of the meat.  I started with a whole lamb shoulder, which gave me plenty of meat and fat to use in making this sausage.  Originally I held back on most of the fat, but after frying up a test patty, I found the sausage to be incredibly mild and deliciously lamby: not gamey or strong at all.  After that I added in more of the fat until I had the moist texture I was looking for. 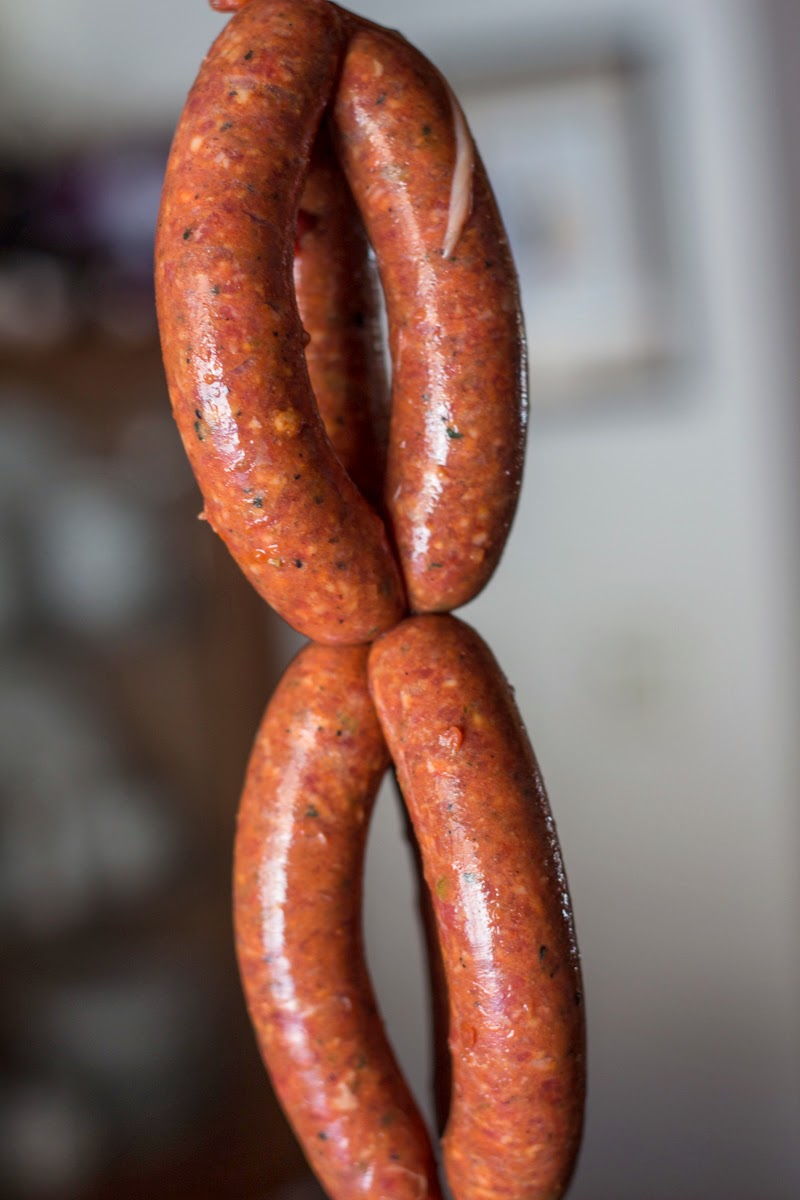 Going into this recipe, I was unsure about a few things: 1.) how mild or gamey the sausage might be, 2.) if too much lamb fat would make the sausage unpleasant, 3.) how the casings would hold up.  But this was a great experience from start to finish and I'm excited to work with more lamb sausages in the future.  Part of me was thinking a lamb sausage with spinach and feta would be great in a pita bread with tzatziki.   I need to remember, however, that the smaller diameter of these sausages does mean they can take less "extras," like a larger diameter pork sausage.  The last thing I'd want would be big bites of spinach and feta with no meat in the middle of the sausage.
SHARE SHARE SHARE