This was an odd recipe that I came across in The Fifth Quarter by Anissa Helou, which she actually found in another book, 1969's Meat, by British food writer and journalist Ambrose Heath.  It's a strange little recipe, but I think the real charm to it is how well it works.  The potato is crisp-skinned and fluffy on the inside, with a delicious (and not overcooked) morsel of kidney waiting for you inside.  The title of this post, Kidney-Stuffed Baked Potato is pretty much all there is to it.

Take two lamb kidneys and slice them down the middle so you can cut out the fat and kidney cortex in the center.  Slice the top off a potato and a small strip off the bottom so it sits flat and won't roll about.  Next use a knife to cut a little pocket (the recipe suggested a grapefruit spoon, but I found that could occasionally tear out a larger section that I wanted). Rub the skin of the potato with butter or lard, and then grease and salt the inside of the potato as well.  Push the lid on top and bake as usual.
After baking at 425 F for an hour, I took out the kidney-laden spud.  Just as Anissa Helou remarked, the liver was not overcooked or dry.  It actually tasted very good with the potato; but then meat and potatoes are classic comfort food.  My only issue was getting a bit of kidney in each bite of potato, as the flaky potato fell away from the kidney as I ate through it. 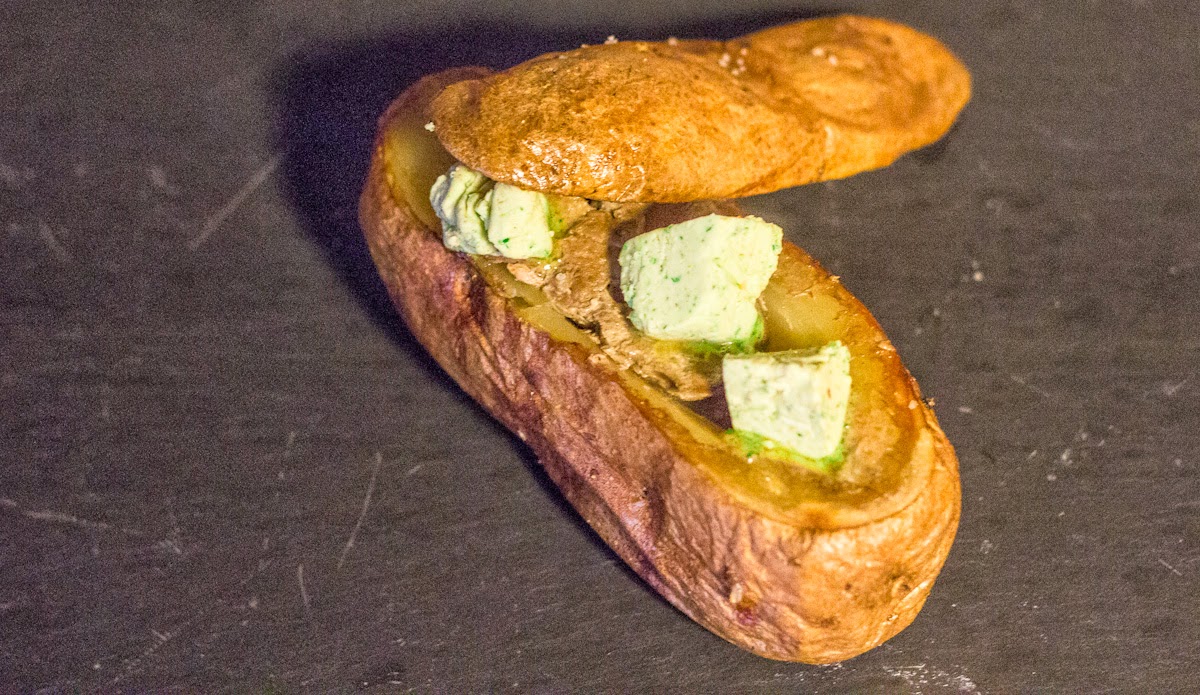 As a finishing touch, I garnished the potato with a compound herb butter.  I tried the recipe from Modernist Cuisine's Montpellier Butter, which suggests using a small amount of knox unflavored gelatin and cooked egg yolk to thicken the butter and keep all the herbs and flavors in suspension.  Just like the potato - thi too worked.  The egg and gelatin kept the butter in a solid form for a longer period of time, rather than melting down to nothing right away.  I really liked the way the butter's melting was slowed, so as I ate down through the potato, the butter would gently melt away, coating each bite.  Both the kidney/potato and compound butter will be repeat recipes.
SHARE SHARE SHARE