Honey in Place of Cane Sugar

It was a year or so ago that I noticed Domino's sugar was now packed in four pound bags instead of five.  I was annoyed.  It seemed like a simple way to keep the retail price the same, by discreetly cutting the bag size by 20%.  Still, I keep buying Domino's sugar, because they're at least honest about the source coming from pure cane.  Other sugars are just listed as "white sugar," and don't list if they're from sugar beets or cane. 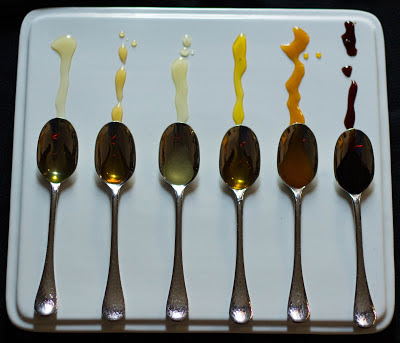 In theory I don't have any problem with beets from sugar, although some people do say it triggers a food allergy.  Historically, the sugar beet is fascinating, as its rise in popularity is tied to wartime rationing.  Starting in the early 1800's, France and England both invested heavily in sugar beet production when wartime blockades cut them off from their Caribbean sugar plantations.  Needing sugar, they turned inward and found the beets fed to livestock were a rich source of sugar.  Today, thanks to selective breeding, those beets can be 20% or more sucrose, compared to the original 5-6% level of pre-1800's cultivars.

But let's be honest, living in Pennsylvania, I'm not going to be raising sugar cane or devoting a large amount of land to sugar beets....let alone extracting and refining the sugar.  So I've been thinking more and more about honey.  Although there are many people who cut our refined white sugar for health reasons, I'm coming at it from a perspective of, "how can I replace an imported product with something I could grow/harvest myself?" 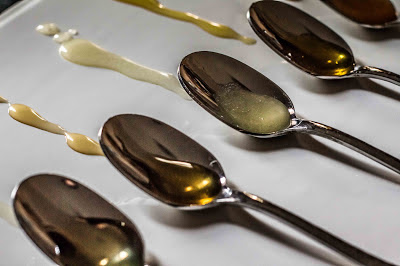 Carla and I have talked a lot about starting up with honey bees, not just for the honey, but also for higher pollination yields and the wax for coating cheese.  So I've been playing more and more with using various types of raw honey in place of sugar.  Using it in bread is pretty simple; you only need to give the bread an extra hour or so of rising time, as the antibacterial properties of honey retard the action of the yeast.  But my biggest daily consumption of refined sugar has proved to be a bit more tricky replacement: my coffee.

At first I thought a dark buckwheat honey would be best, where the husky, slightly bitter flavor of the honey would match the coffee.  This worked out OK, as the coffee's taste wasn't affected at first.  After swallowing, the honey left a lingering molasses like flavor on the finish.  So I switched to a lighter clover honey, which actually had an opposite effect.  The coffee had a floral aroma, and honeyed taste, but the finish was the traditional taste of strong coffee. 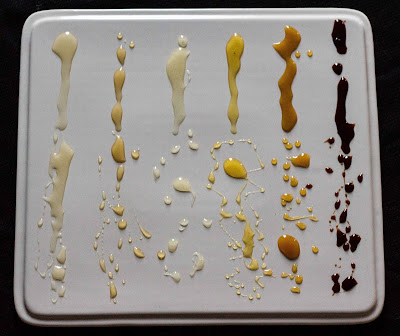 In one of my old cookbooks is the line, "the greatest economy is to simply do without."  This was in reference to coffee shortages, and stretching coffee with roasted chicory or barley.  In the same vein, I'm sure some might suggest I just cut the sugar out of my coffee, or switch to tea, where I regularly use honey.  But a highlight of every morning for me is working my way through a few cups of coffee.  So while I may not keep up this honey-regimen for the long-term, it's an interesting exercise to puzzle through.
SHARE SHARE SHARE

I am such a big fan of honey.
I even use it on my skin as a mask because it has so many great medical properties.

I advice you to try acacia honey. It is my favorite one

You should also try Royal Jelly. http://en.wikipedia.org/wiki/Royal_jelly
In smal quantity (one teaspoon per day during 15 days) It is known to be an health booster.

And finally I have some Muscovado at home. http://en.wikipedia.org/wiki/Muscovado
The taste is very surprising (I like it).

Thanks so much Aurelien! I fallen in love with honey as well, but I've never tried Royal Jelly before. I do enjoy a bit of bee pollen over my muesli at breakfast. I'll need to try the Royal Jelly this winter.

Here in Pennsylvania I mostly find honey from buckwheat and rabbit clover.

For some reason, your post makes me think of this: bit.ly/12anGix

I've tried honey in my coffee, and just couldn't get to like it. Ruined the coffee and the honey!

Now honey in tea is a different matter...