Only Fergus Henderson, author of The Whole Beast, would think nothing of it to include a salad recipe for salted pig's liver curing for five weeks in a section called "Starters."  I would also venture most people wouldn't plan a salad five weeks in advance, but here we are.  So I ordered a whole Berkshire pork liver from Blue Rooster Farm about three weeks ago.  It's a big, smooth, slippery thing...or, it was, before it got packed in a salt and sugar cure. 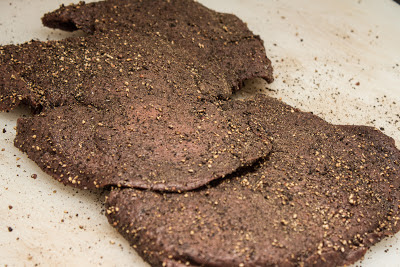 I've always wondered about curing meats other than skeletal muscle, such as a salami made from cow tongue.  Or corning tripe.  There's not a lot of information out there, although I did come across a French company that makes a pork liver salami, which I think is blended with pork meat.  Creminelli in Utah also makes an Italian style "musica" salami during Christmas that has some pork liver in it, but I've yet to try it.  So Fergus' recipe seemed like a great place to start.  During the two week cure time, I found out a few things about curing liver:

1.) They have a lot of nooks and crannies and folds and flaps.  I really had to wiggle and massage the curing salt into all the little pockets and indentations to make sure it would cure evenly.

2.) Livers release a ton of water.  Perhaps they don't hold water as well as skeletal muscle, but this liver produced a lot of liquid.  It actually dissolved the curing salt and made a highly concentrated brine.  Not wanting corned liver, I poured all this liquid off and reapplied the cure.  I'm not too worried about this, as Fergus said it might happen.

So then the liver was rinsed, patted dry, and rubbed with a copious amount of cracked black pepper.  Wrapped like a liverish babe in swaddling cloth, it'll age for another two weeks.  I'm curious about the evenness of the cure, as livers are like lumpy mounds, rising high in the center and tapering off into a thin edge.  My guess is that this will make for very dry edges after 3 weeks, which might just need to be trimmed off.  But for now it's hanging in my curing room on the prongs of a stainless steel bacon hanger.  Nothing to do now but wait and plan the rest of my salad.
SHARE SHARE SHARE

Very interesting!
What temperature do you cure it at?

How did it turn out? I've been meaning to do this for years!

Hi Cro! The liver turned out good, but I think I should have planned a bit more ahead of time for using up the whole liver. Here's my post on using it in a Fergus Henderson recipe:
http://www.culinarypen.com/2013/06/serving-dry-cured-pork-liver.html

Raw, sliced thin, the liver was very mild and not gamey at all. When I seared it, it soften in texture but took on a stronger, minerally flavor. Plus, once the heat left the sliced liver, it became incredibly tough and brittle.

So I used it raw, shaving it like bottarga. It made some nice savory biscuits when added to dough.

I would like to try this again. I'm curious if I smeared it in lard, as you would the cut end of a leg of prosciutto, would that help to hold some moisture? Or just seal it up and cause it to rot.

It's an on-going adventure!

How do you plan to store this? Refrigerator?

You can indeed find cured liver salami in parts of southern France, such as the Carcassonne region, where it is called saucisse de foie. As you say, it is mixed with standard pork mince in various quantities depending on the artisan maker. It is a delicious treat although doesn't keep as long as a 'normal' cured sausage and can be an acquired taste. Note that they also make a similar sausage to cook, also a mix of mince and liver.

Finally, Carcassonne is home to a cured liver based salad, which you may want to try. It is highly local and even a few miles away, no-one will have heard of it. It is sometimes called salade languedocienne, although that name is also sometimes used for a more complicated affair. See below my family recipe, which, although deceptively simple, is delicious.
For ingredients, you only need 4 things:
- small purple artichokes (pointy, not the big globe ones)
- dried liver
- lemon juice
- olive oil

Simple, right? The crunch of the raw artichoke and the length of the liver with the kick of the lemon is amazing! I hope you enjoy it