I haven't been satisfied with my previous work in using Penicillium nalgiovense, the white mold that covers dry cured salami.  I had better luck with my cured beef salami, after adding dextrose to the inoculation bath of mold spores and the casings, but the mold stopping growing after a few days and never reached full coverage.  So I'm trying again.  This time I'm using a basic salami recipe, using pasture-raised Berkshire pork from our local Blue Rooster Farm.  I've cut a large beef bung into three 12" segments (although they lose some inches once I tie them up).  A full beef bung can hold 5-7 lbs of meat, which is a little much at one time.  So by making three 2lb salami, I can cut into one and leave the other two hanging until needed. 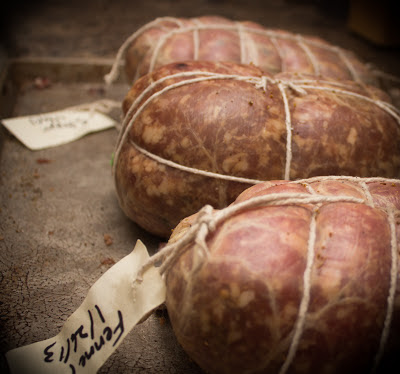 After grinding and mixing the meat, I used T-SPX as my curing culture, and then divided the meat into three batches.  For a bit of variety, I seasoned one plainly with just black pepper, a second with fennel and whole white pepper in the Italian tradition of  Finnochio salami, and the third I seasoned with a mix of whole black, white, green, pink peppercorns, and allspice berries.  Then each mixture was packed into the beef casings and set by the radiator to help the starter culture "bloom" and start curing the meat. 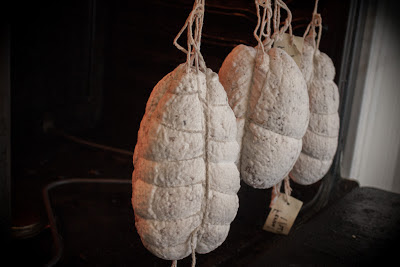 Since it's been so cold, I thought my trouble in getting mold coverage has been from the lower temperatures in the curing room.  To correct this, I hung the salami in my oven for 4 days, which keeps the same temperature as our house, 55 F-62 F.  As you can see from the photos, I think keeping the warmer temps during the start of curing is key to get the Penicillium to bloom.  One thing I did notice is that the casings actually had to dry out a bit before the mold started to grow.  After stuffing the casings, I had the salami on a tray near the radiator.  The salami were covered, but the casings still dried out a bit, forming a pellicle.  The next morning I flipped the salami, but the side that was resting against the tray were clearly moister than the other sides.  After the salami began to grow mold, the side that had pressed against the tray took an extra 24 hours to show any mold growth.  It was only after the casing dried out a bit and became tacky that the first blossoms of mold began to appear.