In all my cook books, I think I only have one recipe for how to cook breast of lamb.  Everyone seems to stick with Breast of Lamb Ste. Menehould.  I always found it funny that I have more recipes for how to cook pig heads and kidneys than I do a lamb breast.  But up until a few weeks ago, it never mattered, as I’d never seen a breast of lamb at market.  Due to their bones and fatty nature, most lamb breasts are just ground up.  Plus I imagine there’s not much demand for lamb breast, having come across references to it so infrequently.  But now, with two breasts of lamb in my clutches, I would have my chance!  And I went with the only recipe I knew of, Breast of Lamb Ste. Menehould. Sainte Menehould isn’t a person, but a town in the Champagne-Ardennes region of France.  I’m not quite sure how this recipe came to be known as “a la Ste. Menehould,” as it’s pretty straight forward.  Take lamb breast, braise in stock with vegetables and aromatics, and cook until tender and all the connective tissue breaks down.  Allow to cool, then pull out the ribs from the meat, as if popping your fingers.  Cut the now boneless slab of meat into strips, rub with mustard and egg, dip in crumbs, and fry or broil till crispy. 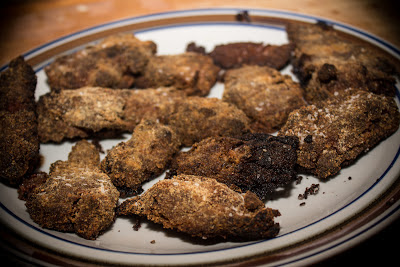 My lamb breast seemed fatty, even after braising, so I actually baked it in a low oven, allowing the fat in the meat to render out and crisp up the crumbs.  The results were little lamb mcnuggets, crunchy on the outside, with a soft meaty center.  They’re not the prettiest thing, but after all the braising, scraping, boning, and baking they went through, I didn’t really expect them to be a elegant eye catcher.  Half way through this recipe, I realized this was a catch-all procedure for dealing with “odd cuts,” a technique Escoffier called Attereaux.  In his Guide Culinarie, he does this braise/crumb/frying technique to everything from tongue and chicken livers to cold polenta and cockscombs.  Although he does usually mix them up by putting a few different meats together, then crumbing and frying the whole thing on a stick.  But to be fair, it works!  Each crispy bite is a meaty delight and as Carla remarked, “after everything you did to it, it doesn’t even taste like lamb!”
SHARE SHARE SHARE