When I want to treat myself to some very nice pork, I'll order it from a local farm, Blue Rooster, which raises pastured Berkshire hogs.  A few weeks ago they had "cottage bacon" listed on their price sheet.  Cottage bacon wasn't something I was familiar with, and I thought it might be a regional phrase for "country bacon,"  a dry cured, smoked, and aged form of bacon.  But a quick google search proved I was totally wrong. 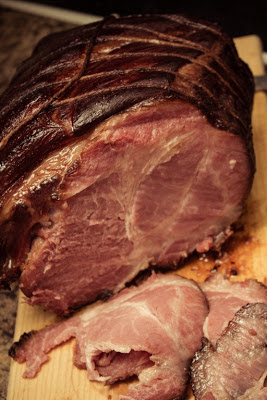 Cottage bacon is basically a pork butt, cut into a long circular loin shape, that's then cured and smoked.  It looks like a baconized version of capicola or coppa ham.  Reading more about it, I found the main complaints with cottage bacon is that it was 1.) fattier than Canadian bacon and 2.) leaner than regular bacon.  Sort of the middle child of the bacon world.

But it caught my attention.  Before this, the only cured pork should product that came to my mind was tasso ham, basically a supercharged, chili pepper-rubbed pork butt used in Cajun cooking as a seasoning meat.  Thinking about it from a small holder's perspective, if you had a pig and needed to preserve as much of it as possible, cottage bacon seemed like a natural development to extend the life of the pork butts.  Plus, North Country Smokehouse, who makes exceptional bacon, offers their own version of cottage bacon.  They remarked that it was popular among restaurants, as the circular shape was perfect for topping a burger.

So I was in.  I trimmed a pork shoulder into a 3.5" diameter log-shape and smeared it with a curing mixture of salt, sodium nitrite, and sorghum.  Molasses or maple syrup would probably be more traditional for a Pennsylvania cure, but I've been in love with sorghum-infused pork.  After a little over a week's cure (the thick nature of this cut necessitated a longer cure than a narrow, flat plank of bacon), I smoked it for several hours with cherry wood.

Not to get all high and mighty, but I think this cottage bacon would help convert some skeptics.  It does fry up nicely, although more in the brown/crusty way of Canadian bacon than the crispy/fatty way of belly bacon.  But the smoky, salty, sweet flavor are perfect.  Perhaps I should have realized this earlier in the game, but at first bite I thought, this isn't too different than eating ham.  Regardless, it's a happy addition to both my curing repertoire and my belly.
SHARE SHARE SHARE