Looking at the below photo, you might think I was inspired by Green Eggs and Ham, but I actually owe the creation of this vibrant green loaf of bread to Robert Heinlein’s 1955 novel, Tunnel in the Sky.  Given to me by my father, I was totally captivated by this book.  Then when I heard about the Hunger Games last summer, I couldn’t help but remember Heinlein’s own story of kids sent to a strange planet to compete against one another.   While fun to read, the Hunger Games wasn’t quite the revelatory experience of Heinlein’s novel.  But one thing did stick with me – each region of the Hunger Games had their own bread. 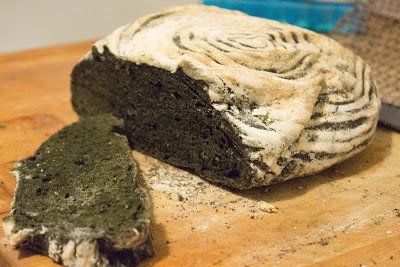 Much as I was inspired by the cornflour cookies in the novel Wool, I was fascinated by the idea of the fishing districts that produced green-tinted bread from flour mixed with algae and seaweed.  Sure it sounds odd, but if you’ve ever eaten sushi, chances are you’ve had nori, which is just dried, pressed, red algae.  Looking into the types of algae on the market, I was surprised at the range of products available.  Ultimately I chose chlorella, which I keep calling “cholera,” a verbal slip that Carla finds very unsettling.  Chlorella takes its name from the high levels of chlorophyll in it.  This particular powdered form has been “cracked,” meaning that the cell walls have been partially broken to allow for better absorption.  What’s amazing to me about chlorella is that only 10 grams (2 teaspoons) has 105% of RDA Vitamin A, 72% iron, and 5.8 grams of protein.  It actually makes sense that adding algae or seaweed to dishes is a great way to add extra vitamins and minerals to improve the nutrients in food.

Mixed up as a shake I thought this tasted awful.  Well, "awful" might be too strong of a word, but it didn’t taste like food.  It has a very strong base mineral taste, as if you were eating a raw element of the earth.  It didn’t taste salty or fishy at all, which was a reminder to me that this was a freshwater algae.  Now, after that wonderful description, I’m still going to say I enjoyed this much more as a bread.  Mixing 1/4 cup into a 2.5 cup loaf gave it a gentle, slightly vegetable flavor with a finish that still carried that slight mineral flavor.

It was actually pleasant to eat, with an interesting, unplaceable flavor.  Looking into the history of chlorella, I found its incredibly dense nutritive values made it an attractive vitamin supplement, especially with the quickness that simple algae can grow.  Sadly, most of this research was done back in the 1940’s and it was found that algae also suck up lots of toxins and other water contaminants, ruling out many natural freshwater ponds.  What seemed like a simple superfood became incredibly hard to produce and process in a clean manner, requiring man-made water tanks, pathogen testing, etc.

While a little deflating, it did explain the relative obscurity of chlorella, and the high price tag.  Although in a way, its funny; stumbling upon something which is at first exciting and new, then finding out it was ruled out as an impractical food source 70+ years ago.  “Everything old is new again,” as the old chestnut goes.  Perhaps one day my children will come to me, with their modern haircuts and odd pants, and ask me why we don’t eat more chlorella.
Tweet
SHARE SHARE SHARE