Time Life produced an amazing run of cookbooks back in the seventies. They chronicle an interesting time in American food life, when food was still very regional, and each region distinct. 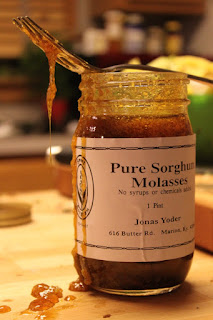 There was no "fusion" cuisine in today's glitzy sense, just a mash-up of immigrant dishes trying to adjust to the New World's produce and seasons. Each book is comprised of articles about each region's famous foods and peculiar tastes, with recipes following at the end of each chapter. I love the articles, but the photos are what keep running through my head. That's what first got me interested in sorghum molasses.

The picture was of an older, sunburned man feeding either sugar cane or corn stalks through a grinder. The grinder was powered by his horse, treading a slow circle around the man and his mill. That plant was sorghum, a "grass" just like sugar cane that's grown throughout Kentucky, Missouri, Tennessee, etc. After grinding the juice out, the man cooked it in a giant cauldron until it became a frightening, foaming greenish-brown syrup.

It's hard to find sorghum up here in Pennsylvania. Sorghum molasses production has been declining since the 1900's because it's so labor intensive to produce. I only saw one commercial bottle, which under closer inspection read "A sorghum-inspired syrup. Ingredients: Sugar Cane Molasses and Corn Syrup."

Thankfully, the web came to the rescue. A few days later I had a box of Jonas Yoder's Pure Sorghum Molasses from Marion, KY at my door. It did have a slightly yellow-green tint, just like in the Time Life book. Its texture was odd, like a cross between crystallized honey and smooth honey. The crystals would slowly melt on your tongue, releasing a sweet, husky flavor akin to buckwheat or chestnut honey. It didn't have the bitterness of chestnut honey, but instead a slightly smokey, barely perceptible astringent flavor. Like a green tea that brewed just a minute too long. You can only eat so much sorghum straight from the jar, so I took a cue from the Time-Life cookbook and made a pie. 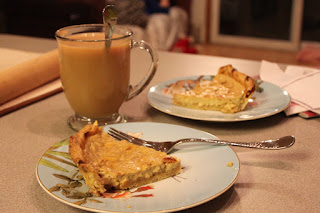 A custard pie with a cornmeal and flour crust was a delicious way to savor the unique and intense flavor of the sorghum. The cornmeal in the crust was my own addition, since I was on such a southern-themed roll. I also tried it as a glaze for seared duck breast, with the robust sorghum holding its own easily with the gamey flavor the duck's meat and the rich fattiness of the skin.
SHARE SHARE SHARE

I really liked the Sorghum on Ice Cream. YUM! ;-]