Carla went out of town this weekend, so I treated myself to a cow's tongue. We normally travel together, but when Carla and I 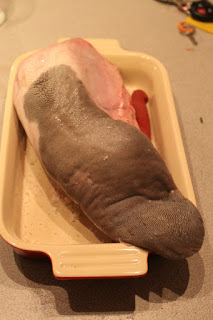 do separate, I usually take the time to cook myself some items she's not a fan of. So Friday, while the beef tongue was smoking away on a hickory-chip loaded Weber grill, I also gorged myself on a large tin of smoked herring. Nom nom nom.

My point behind this post isn't to extol the virtues of a bachelor pad filled with kipper tins and skinned cow tongues, but to mention I've made the most delicious tongue sandwich yet! The problem with tongue is that its so dense and lean that it doesn't become tender and succulent, even when braised. Braising works wonders, but it's never as satisfying as a traditional beef chuck and shin stew. But how about a traditional London Broil? There you take a dense piece of meat, braise it, then slice it wafer-thin and cover it with a luscious sauce to make up for the dryness of the meat

It was a solid plan, but the warm weather had me in a grilling mood. So I smoked the tongue, rather than braising it. To help the smokey flavor permeate the dense meat further, I wrapped it tightly in plastic wrap and let it sit for 18 hours in a fridge. This is something I learned from Rogue Creamery. After they smoke their blue cheese, the wheels are vacuum sealed and stamped with a "Don't Open Until" date several weeks away. After the tongue had mellowed for a bit, I sliced it thinly with my meat slicer.

To add some moisture back to the dish, I made a creamy coleslaw of cabbage, carrots, and several generous teaspoons of grated horseradish. A few minutes in the oven gave me a hot, smokey tongue sandwich topped with crunchy, zesty slaw. The thin-slice really helped to counter the toughness of the meat, while the snappy horseradish flavor cut through the richness of the tongue.
SHARE SHARE SHARE