This is a "special edition" stout I brewed back in October as a little Christmas gift to my family. When I first started home 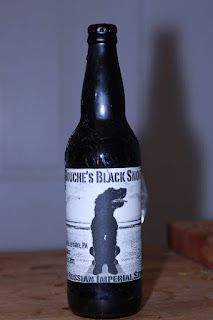 brewing, my family suggested I make up my own labels for the different batches. I like the idea, but it would be a good amount of work, as I would have to soak and scrape off the old labels when I wanted to reuse the bottles for another batch of beer. But Christmas seemed like a special occasion, and with the help of my talented wife on the creative design end, we made up about twelve 22oz bottles of Bonne Bouche's Black Snout Stout.

Bonne Bouche is our 12 month old Golden Doodle, named after one of our favorite cheeses that has a particularly striking black ash rind. I brewed this beer in the style of a Russian Imperial Stout, which were originally made by Thrale's Brewery in England to be served for the Russian Imperial family of Catherine II. To make the journey from England to Russia, the beers were brewed to high levels of ABV, and loaded with additional hops, which preserve beer with alpha acids present in their buds/cones. Combined, these two factors helped the beer to arrive in Russian unspoiled, but also gave the RIS-style of beer the ability to age gracefully if stored properly. 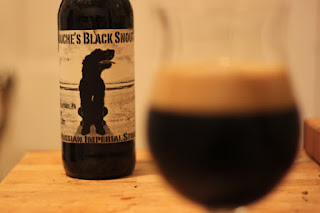 I used lots of debittered black malt and black patent malt in the recipe, along with roasted rye and wheat. The rye is to give sweetness, fullness, and a well-rounded flavor to the beer. The 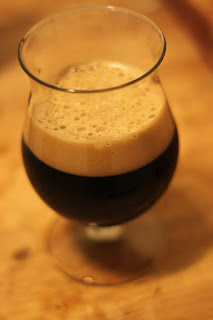 wheat also adds some fullness to the mouthfeel, but also helps to create a frothy, whipped head of foam on top of the beer. I also held back on hopping this beer too aggressively, as I do like the rich, full flavor of stouts and didn't want too much bitterness mixed in.

To start the beer off, I fermented it with a Irish Ale Yeast, which would help give me the rich, full profile I wanted. With so much malt and sugar in this beer, I didn't want the final product to be too cloyingly sweet, so after 4 weeks of fermenting with the Irish Ale, I added a Eau de Vie yeast, which can tolerate much higher alcohol %'s than the Irish Ale. This helped to eat up the residual sugars and dry the beer out, along with raising its final ABV.

Overall I'm very pleased with this beer. I did worry that added the Eau de Vie would give the beer an odd crispness or alcoholic rawness, but I think the naturally sweet flavors of the rye and wheat helped to keep the flavor in line. I'm very excited to see what it's like in a year from now! 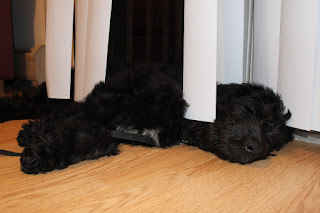 Culinary Pen is an adventure in learning about food. Even if you don't drink beer, for example, it is exciting to learn about the origin of Russian Imperial Stout.

What is the optimal length of time to age the Black Snout Stout? How long is too long? Will it be good after five yars?

I am excited to open mine, it will be worth the wait!

I'm really excited to try it out after a year, but it should be good for 2-3 years.