It's three weeks into the curing process and the salami is looking great! It's taken on a deep garnet color as the sodium nitrate breaks down into sodium nitrite and cures the meat. The salami has also shrunk a good deal and gotten harder. The small, skinny ones feel very firm and dry, so I think they'll be ready to eat in a few more days. The thicker ones are on their way, but still need another 2 weeks or so. 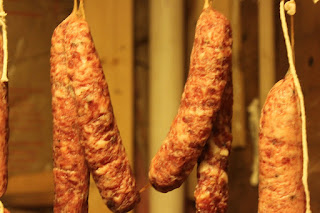 Although I haven't tasted the salami yet, I'm feeling very positive about the process. I think for my next curing I would like to try some mangalitsa. I have a whole leg muscle in the deep freeze that I'd think would cure well. It's not a huge step up like curing a whole leg, but I'd like to try something other than another round of salami after this. The muscle isn't very thick, so I think it will cure evenly, without much additional difficulty than the salami. Although, unlike the salami, where I just blended in the salt with the meat, the whole muscle will need to cure in salt for several days to draw out the water and evenly infuse the salt throughout the meat. But with this new cold snap, I'm sure I'll find the time for some additional hobbying in the kitchen.
SHARE SHARE SHARE