This is the remnants of a truly decadent ham party. Some colleagues of mine were celebrating over the holidays and one of them flew in from Spain with an entire leg of Iberico ham. This is the fabled ham - from black foot pigs fattened on acorns for the last few months of the lives. Converted from Euros, it cost him over $3K. 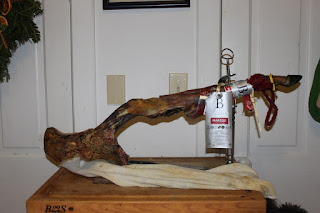 But I missed that party. Friends being friends, however, they saved me the bone. It actually worked out very well; I loaned them my ham-carving stand and they returned it with the leftovers. The ham tasted intensely porky and umami-esque...with an odd peanut flavor to the meat. I'm guessing that's from the diet of acorns, but it was certainly unexpected on my end. After I nicked and scratched out as much meat as possible from the bone, I cut off the shank and made what may be the most expensive pot of ham and black beans ever.

But as I was slicing and nibbling, I was amazed at the number of tags, brands, tattoos, and seals affixed to this ham. Everything was there, from producer to region, to the months salted, aged, etc. I don't think my passport even has this much identification. I suppose before you shell out three large for a pig leg, you want to make sure you're getting your money's worth. 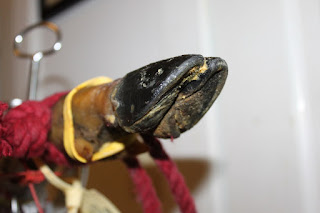 (As one more aside, I also don't understand why they pulled off the back toenails, yet left the front nails on...you'd think they'd do it all-or-nothing.)
SHARE SHARE SHARE

Ive just got my hands on a pata negra ham bone, and picked off all the little scraps, but not sure what to do with it now. What was your recipe for the ham and black beans?

Hey Mark,
My recipe was very straight-forward, as I wasn't quite sure how much flavor the cured pork bone would impart in the beans. I've used fresh and smoked bones, but never something so long in curing and worried the cured marrow might actually impart an off-flavor to the beans.

So I kept things simple and soaked black beans overnight, then simmered them for two hours till they were about half tender. Then I added the bone and left the beans to slowly cook for another two hours.

I usually let beans cool in their cooking liquid for an hour or so, so they can take up any extra liquid and avoid a mealy texture. So the pata negra bone got about 3 hours stewing time total.

The beans were very good, with a modest cured pork flavor. More than anything I think the bone helped to give a well-rounded, savory/umami flavor to the beans. If given the chance again, I would worry less about masking the flavor of the pate negra bone and add my usual accompaniments of red onion, sliced piquillo peppers, etc.

Best of luck with your pork bone! Let me know if you find anything out/have a different experience.