When I told my brother Mike what I planned to cook for New Year's, he was surprised, saying, "I normally associate you with more land-based foods, like pork, cheese, and vegetables, not seafood." Which is true, although I do love, love, love tins of oily sardines. But it's New Year's, which is certainly time to do an elaborate meal with some extra voomph! 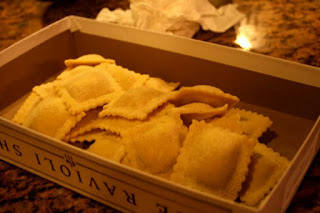 So on New Year's Eve my mom and I picked up two 1.5 lb lobster, a quart of cream, as well as a package of fresh lobster ravioli from the local Italian pasta shop. I've wanted to try making a lobster cream sauce for a few weeks now, ever since reading Sauces by James Peterson. It just sounds so rich and luxurious, as well as being major change of pace for my cooking. Normally I'll just introduce the fish to the hot pan for a minute, flip it, and serve with sea salt and olive oil. 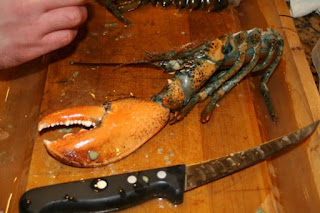 As Dean Martin played in the background, we stabbed the lobsters behind the eyes, then cut them into segments. After wiping out the lungs and tomally, we set the lobster meat and shells to simmer and infuse in the cream for about 30 minutes. Then came the fun of picking out the meat from the shell, along with eating any small pieces that needed a bit of quality assurance. While my mom and I picked and nibbled, the cream slowly reduced until it could coat the back of a spoon. 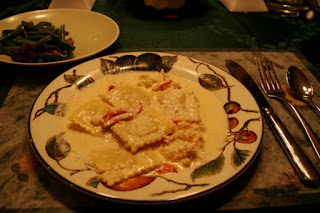 Now, aside from the labor of the shell picking, this was a very simple dish to make. And it was exquisitely rich and delicious. We thought about adding some sherry if the sauce was too cloying, but it was perfect. Plus, the lobsters only came to $22, which wasn't that bad spread over six main course servings. Not that you should normally replace your regular pasta sauce with a quart of heavy cream...
SHARE SHARE SHARE

Looks and sounds fantastic! Wish I was there to try it.

If you haven't seen it before, you may be interested in the Monterey Bay Aquarium Seafood Guide.