As much as I learn about food, it always surprises me just how much more there is to understand. Often simple things turn out to be incredibly complex and nuanced once you cut past the surface. It's like Alice, falling down the rabbit hole and wondering if she'll ever hit bottom. That's how it feels like as I learn more about hops and hop varieties. 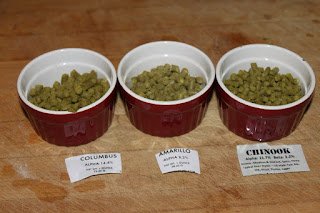 On the surface hops are vines that produce little flowery "pine cones" that preserves beer and adds bitterness and flavor. Some are piney, some taste of citrus, others are coarse and earthy. Some are gently bitter and others are intensely bitter. But they also have different kinds of bitterness. The bitterness is created by different types of alpha acids: humulone, cohumulone, and adhumulone.

India Pale Ales (IPA) are some of the hoppiest beers available, and for several years people have been trying to add as many hops as possible to beer. Like a global brewers game of one-upping yourself over the next guy. But it's a balancing act to make a beer taste bitter and intense with lots of hops, but still taste good. The last thing you want is to spent $6 on a pint of beer that tastes raw, harsh, and uneven.

So now brewers and hop farmers are looking at creating hops with low-cohumulone counts that still have intense bitterness. Cohumulone is the alpha acid that's responsible for less desirable bittering flavors, so growers are trying to create varietals with low-cohumulone content, but still high alpha acids. Imagine a chile pepper with a bold, intense flavor, but only modest heat. All the flavor without the fire.

That's the draw behind low-cohumulone hops. Wicked bitterness with intense flavor and aroma, but no vicious finish. I've been on a bit of an IPA-kick lately, so I wanted to try a low-cohumulone IPA myself. I hedged my bets and used 2 ounces each of three popular low-cohumulone varietals, Amarillo, Columbus, and Chinook. I mixed them evenly and added 2 ounces at 60, 15, and 5 minutes on the boil time. The result is everything I was promised, a bright, floral, citrusy aroma, with a long, piney finish of well rounded bitterness. It's not the best IPA I've ever made, but after this experiment I think I can focus my efforts and make something really stellar.
SHARE SHARE SHARE