After we killed the first Mangalitsa at Mosefund Farm, Christoph cut out a piece of the backfat for us all to try. It was mild, clean-tasting, and didn't leave a film of grease in your mouth. Then we took out the liver and tried a small cube, still warm with the pig's body heat. It was the mildest liver I've ever tried from any animal, to say nothing that most pig liver is incredibly strong and coarse tasting. The next day, as we tried other dishes made from the pigs kidneys, lungs, and liver, I was again surprise how clean and mild everything tasted. In a way, I wonder if the American taste for offal dropped off because industrially raised animal offal just doesn't taste as good as old fashioned, slow-grown farm animals?

I've come away from the class with the opinion that this is absolutely the best way to raise animals. I've daydreamed about having two pigs like Hugh on the River Cottage, but now I need to make that a reality. The animals have plenty of space and live for 1.5 to 2 years, rooting and poking their snoots about for nuts and grubs. That's much better than the 4-5 month lifespan of commercial hogs. Then the animals are killed quickly and cleanly, in their own home. Christoph showed us how to check the glands in the neck. If they're light colored, the pig died quickly and without stress. If they're hard and black, the pig was under a lot of stress. Commercially killed pigs, whether from a large industrial farm or a small farm, are normally under a lot of stress. They're in an unfamiliar space with lots of other unfamiliar pigs. There's no established hierarchy, so the pigs fight all night until they're killed in the morning. This also pumps lots of water into the joints and silver skins, which makes the meat harder to cure and more prone to spoilage. I'm coming at the issue with the belief that I can give these pigs a much better life than what they'd have in a commercial lot. They can live a wonderful life, die painlessly, and then provide food for my family. It was a good experience, but it opened up a lot of questions that I'm not sure have an easy answer. 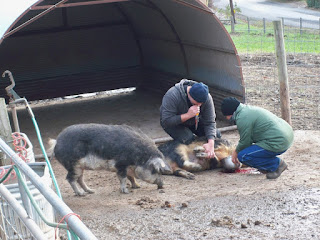