This past weekend I attended Mosefund Farm's Pigstock, which is a three day workshop focusing on slaughtering, cleaning, butchering, and cooking all parts of the Mangalitsa pig. 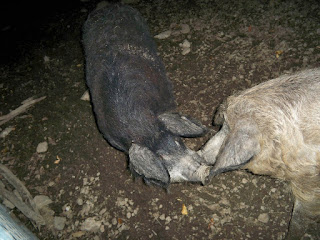 The Mangalitsa is a heritage breed of pig from Austria and Hungary, raised for their delicious meat and prolific production of fat. If the last part sounds odd, remember that lard was the primary cooking medium for many parts of Europe, unless you were living in an olive grove on the Mediterranean. 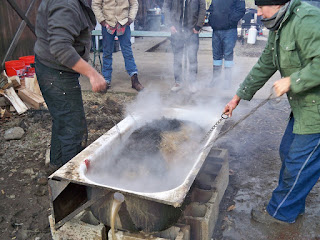 Mangalitsa are also called woolly pigs, due to their furry, sheep-like coats of thick, bristly hair. The breed almost died out a few decades ago, as even compared to other heritage breeds they take a long time to grow and require a large amount of food and land. 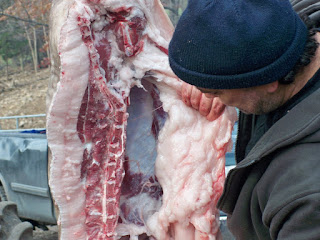 The workshop was taught by Christoph Wiesner and his wife, Isabel. Christoph is the President of the Austrian Mangalitsa Breeders' Association. Both Christoph and Isabel took us through killing the pigs with a captive bolt pistol, then sticking them to bleed out. We then dunked the 300+ lb pigs in a tub of simmering water to help get the hair out. After scraping off the hair, Christoph took us through removing the organs and cutting the pig in half. 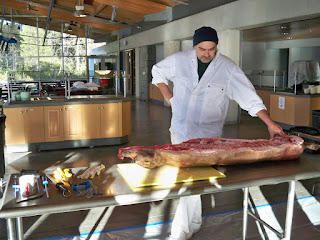 I think sawing through 4-5 feet of pig spine was one of the most exhausting things I've ever done. Actually the hardest was sawing through the skull, after my arm and shoulder were already jelly from the spine. Needless to say, Christoph is a big guy from doing this for years and years. 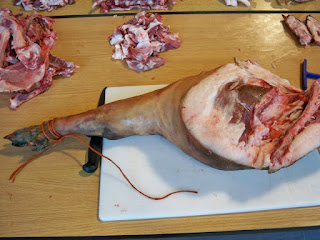 The next day Christoph showed us the principles of seam butchering, which is the process of removing all the bones of a carcass and not cutting through muscles, but removing them whole. Since Mangalitsa's have so much fat, you need to maximize the value of the meat and save every scrap of it. This is the opposite of most butcher shops, where they just run everything down a band saw. 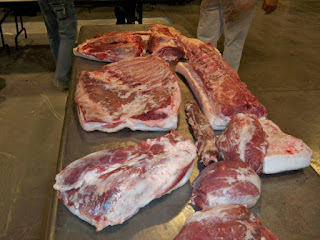 During this time, Isabel worked on cleaning all the organs and made many, many wonderful dishes, like spleen on toast, a heart and liver soup, kidneys with mustard and cream, brains with eggs, fried brains, and liver schnitzel. 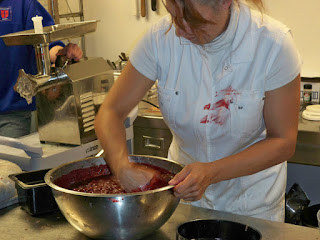 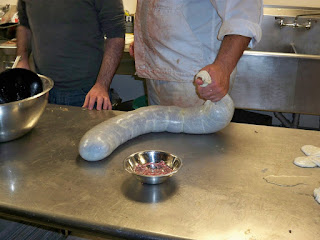 One thing that really impressed me is the level of intensity that both Christoph and Isabel have for butchering and cleaning the animals. Even though they've been doing this for years, every scrap of meat is still important and every cut should be perfect to respect the animal. 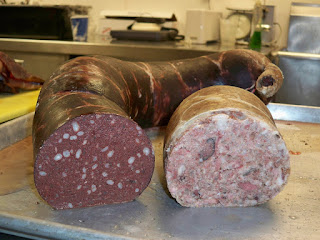 Christoph opened the class by saying our main goal as butchers and cooks is to not destroy the good. The Mangalitsa is a good breed, with the genetics to produce exceptional pork. They've lived outside for 1.5 to 2 years, eating locally raised barley and grains, while foraging for grasses, nuts, and seeds in the forest. The last thing we want to do is destroy that, either with sloppy butchering or careless cooking. 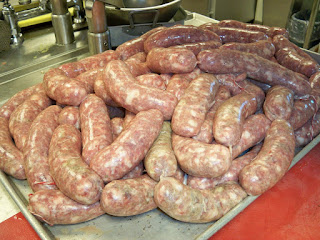 I know these are lard pigs, but that photo of the fatback is pretty impressive. Did you render all the lard already?

Nope, I'll be bringing you a big hunk of fatback you could use for lardo or sausage making, along with a container of rendered lard.

One of the guys in my class took this last year as well and recommended using Mangalitsa fatback for improving his homemade sausages when he ran out of meat and had to use store-bought pork shoulders.

great pictures! and was nice to meet you. the backfat i brought back is in cure now at the restaurant for the thickest lardo i have ever made!

MFB- It was an amazing time. The pigs do root for grubs and anything else small and edible. I also forgot to thank you for the rat! I'm excited to fill it up with something for thanksgiving.

Hey Josh, it was great to meet you as well! Are you doing the lardo plain, or going to add herbs to it?

I use a pretty basic seasoning mix. black pepper, juniper, thyme and bay.

Impressive report on a culinary workshop. You are "vertically integrated" when it comes to food. You do it all and educate readers.

By the way, what's that about filling a rat for Thanksgiving?

I am looking forward to the thanksgiving rat!

A couple years ago, Reverend Greg (you will remember him from wedding) brought us some pig he had shot in TX. It was some of the best pig I have ever eaten. Greg attributed it to all the acorns the pigs were eating in that part of TX that year.