This is another odd pie recipe I found a few years ago, but have never gotten around to making. But this autumn I've motivated myself into finally baking them, one by one. I've seen this pie called "Bourbon Pie" in the south, but I found this recipe attributed to a NYC restaurant in the 1970's. I find it funny, as changing the name to "Cognac Pie" makes it sound more metropolitan and sophisticated. Yet, it's pie, which to me is the epitome of homey desserts. Plus it's poured into a graham cracker crust, which makes me think of a dessert you'd make for a little kid's birthday party. 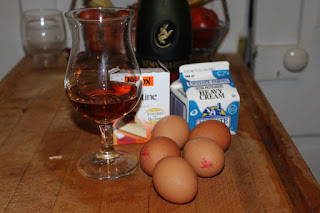 At the root, I don't really consider a cookie-crust pie to be true pie. It's more like a giant bar cookie, baked in a concave shape. Key Lime Pie is still my #5 favorite pie of all time, but that's because it works so perfectly as to be faultless. The whole is greater than the sum of its parts. But that's the only exception I'll make. This cognac pie gets only a momentary pass because I got all the ingredients out before reading the line "pour into cooled, prebaked graham cracker crust." 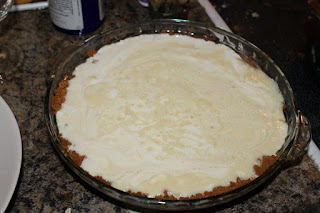 I was also surprised to find this is a no-bake pie, despite all the egg yolks. Clearly, I should read recipes in greater detail before plunging in. It's an odd recipe, to say the least. Mix 4 yolks with sugar, then mix a packet of gelatin with 8oz cognac. Combine, whisking thoroughly. Whip up 8 oz of heavy cream, then fold into the cognac and eggs. Chill for 2 hours, then dust with cocoa. 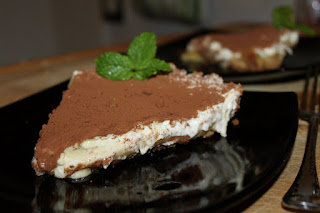 After two hours, I gave the pan a wiggle to ensure it was firmly set. It sliced cleanly, although the cognac gelatin had settled to the bottom and the marshmallowy whip cream rose to the top. It tasted like an rumball crossed with custard. It's delicious, but also with the heady flavor and slightly hot taste of raw alcohol. For future pies, I think I would thicken the graham cracker crust, to give all that gelatinized cream some extra crunch and substance. It did have a nice flavor as well, although I wonder if this pie would benefit from being made with a milder, smoother alcohol, to round out the overall eating experience.
SHARE SHARE SHARE