I don't think Carla could have found a better gift than this for me; Rush Creek Reserve by Upland's Cheese. Upland's cheese did the impossible this year, winning "Best in Show" at the 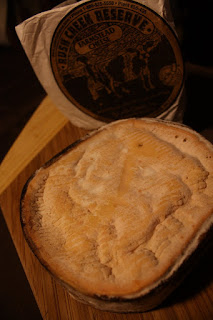 American Cheese Society for their Alpine-style cheese, Pleasant Ridge Reserve. This is the third time Pleasant Ridge has been awarded Best in Show by the ACS, a feat no other cheese has won more than twice.


Pleasant Ridge has been in my top five cheeses for a while now. It's like a American, seasonal version of French Comte. Upland's only makes it with the milk from spring and summer. The rest of the year they sell their milk and focus on aging Pleasant Ridge. It's the only cheese they've made for years. But it's awesome. 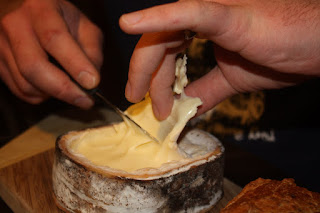 And now they've made a second cheese, with an equally impossible goal; to create a raw milk cheese based on the recipe for Vacherin Mont d'Or.

Vacherin Mont d'Or is next to Pleasant Ridge in my top five, and probably ranks as Carla's 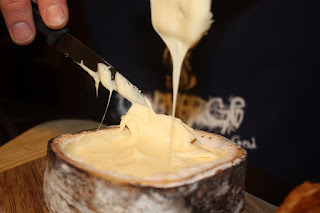 favorite cheese of all time. It's made in the coldest region of France, during winter. The cheese is soooo gooey that the sides are wrapped with a binding of spruce bark to keep the innards from pouring out. The bark gives the cheese a woodsy, mushroomy flavor, along with introducing some interesting microflora to the rind. To enjoy Vacherin, you slice off the top and spoon out the runny paste like a cold fondue. In the U.S. we can only import pasteurized versions, which are still very good. But they could be better. 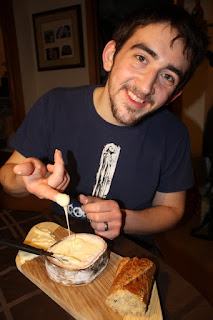 And that's where Rush Creek Reserve comes in. Since there's little chance of the FDA/USDA deciding to let people make their own choices on raw milk, all raw milk cheeses must be aged over 60 days. So cheesemaker Andy Hatch has been playing around with creating a raw milk Vacherin-style cheese that won't be over the hill at 60 days when he can legally sell them to consumers.

Carla and I shared this amazing cheese for New Year's Eve. As soon as we tasted it, we knew we were experiencing something special. At first it hits your tongue with salt, then suddenly a wonderful, fruity sweetness opens up. Neither of us expected the sweetness, nor how long it would prevail on our palates. After the sweetness slowly mellowed, we could taste a slight, beefy pungency from the washed rind.

We tried to make it last, but I think we were scraping the insides of the rind of every last drop within about 20 minutes. What makes this cheese so exceptional is that it isn't a one-dimensional copy of Vacherin Mont d'Or. As Upland's cheese has proven time and again, they know how to make great cheese. So to simply copy an existing cheese isn't what makes Rush Creek Reserve so great. But to embrace the challenge of making a Vacherin-style cheese, while still making it your own unique product with its own individual nuances, is what I find truly thrilling about this cheese.
SHARE SHARE SHARE