Three weeks ago my brother Steve married his fiancee Youngjoo in Seoul, South Korea. It was a beautiful wedding filled with 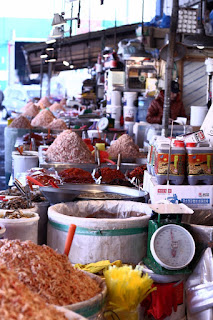 delicious food and delicious memories. Steve and Youngjoo are great hosts, taking particular care of my delicate appetite. At no point in the trip did we go more than two hours without eating something amazing. Youngjoo's parent's pulled the ace card, however, when they took us to Seoul's temple to the sea, the city's fish market that spanned a block.

Inside the warehouse, which was bigger than a football stadium, hundreds of vendors operated private stalls. The market seemed to be divided by the type of seafood. 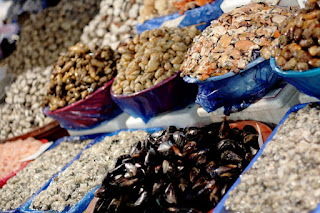 One section focused on dried shrimp, squid, and various murky sauces; another on live 2-4 lb fish in oxygenated tanks; others showcases expensive and exotic shellfish; some only featured a single, giant fish like a swordfish or tuna. 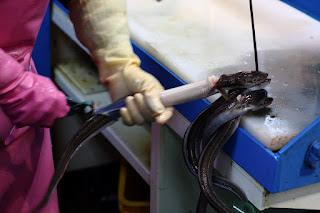 Everywhere we went, people were eating. The vendors had small stoves to heat their tea and soup pots. Some would prepare the fish into sashimi right in front of you, then motion to a small table in the corner of their stall for you toenjoy the fish with a splash of chili sauce. Young men on motorbikes seemed to be taking orders of noodles to different parts of the market for delivery. We ate these eels raw, with the meat and crushed bones mixed together into little bundles. 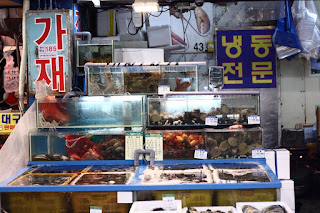 Speaking of noodles, this stall (pictured here) confused everyone in my family. It was only when Youngjoo's mother told us it was shredded jellyfish that we grasped what we were seeing. The owner did not speak English, and I can only say "thank you," "I'm sorry," and "this is delicious," in Korean, so I don't have more information on this. I wonder how big the original jellyfish was? It looked like the fish was sliced like vermicelli, the salted and dried slightly. I think the stuff in bottles is a sauce made out of the jellyfish. We tried jellyfish twice in Korea, both times in a cold salad. One salad had a crippling sauce made primarily of horseradish, while the other was just a light vinaigrette. Both times I was surprised how mild the jellyfish tasted, as I thought it would carry a funky tang of dried/reconstituted seafood. It was like eating an al dente rice noodle. 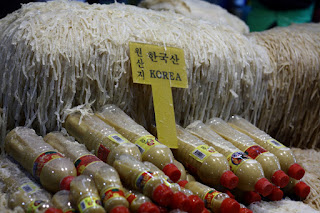 Excellent post. Yes, this is the Karakdong fish market in Seoul. It is truly a remarkable experience and you captured it perfectly. Great photos too.

How to describe the texture of sea cucumber?