Carla regularly outdoes herself with gifts, with this Christmas being no exception. She picked up two amazing cheeses that I thought I wouldn't get a chance to try. I'll write about the centerpiece cheese in my next post, but I wanted to take a moment to review the amazing little goat cheese she purchased on an impulse buy. 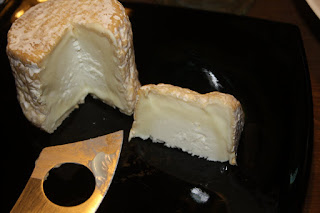 Andante Dairy is located in California. If you're not in California, you'll probably never try her cheeses. Soyoung, the cheesemaker, primarily makes small, soft-ripened cheeses in the tradition of camembert, crottins, and banon. These cheeses have a short shelflife compared to harder cheeses. This fact, coupled with Soyoung's small batches, makes these cheeses notoriously hard to find. They are served at the French Laundry, a small California restaurant you may have heard described as "the greatest restaurant in America" 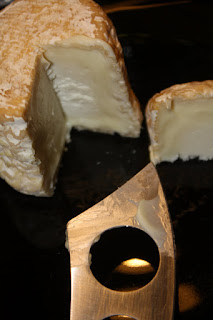 by the press since 2000 through to the present day.


Carla remembered me waxing poetic about wanting to try her cheeses, so she picked up Charolais, a small, raw milk goat's cheese shaped like a tiny drum. It's about 4 oz, and looks like a giant crottin, the small buttons of chevre ubiquitous to french cheese plates. It's made of raw goat's milk, which is unusual to find in this country. Underneath the wrinkled, velvety rind, the paste had turned to a slightly runny cream, but the cheese still had a solid heart of firm, flaky chevre.


The cheese had a modestly goaty flavor, which I like, with a gamier flavor by the rind. The chevre tasted of lemon peel, hay, and finished with a sharp, minerally bite. To lift a good descriptor from another writer, this cheese was "flinty." It was very nice with a crisp, yeasty bottle of Duvel Belgian ale.
SHARE SHARE SHARE