Along with aged, bandage-wrapped cheeses, I've spent a lot of my cheesemaking energy focusing on perfecting a stinky, gooey washed rind cheese. Carla loves Epoisses, a salty, savory cheese from France washed in a brandy called Marc de Bourgogne. What I've been trying to do is combine my beer brewing with my 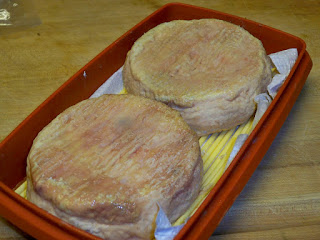 cheesemaking, where I wash the cheese with one of my own beers or meads.

So far it has been mixed results. Washing the cheese in an acidic, barnyardy lambic resulted in a very pungent cheese (a plus), but one that almost ripened too quickly. We enjoyed one perfect cheese, but less than five days later the second one ripped out of its fragile skin and pooled all along the bottom of my cheese cave. Washing in meade was fine, but left a slightly "odd" aftertaste. To counteract the runnyness of the cheese, I added a culture called geotrichium candidium, which results in a tight, dense rind. This is a culture used in other washed rind cheeses, like Normandy's Pont l'Eveque. This addition helped with the texture, but I felt the cheese took on a sour flavor.

Today I'm trying a new variation - same cultures (no geotrichium), but using a milder lambic. This is a beer I brewed with 1/2 the normal amount of malt, but added three gallons of apple cider to two gallons of water, compared to the usual 5 gallons of pure water. It also used a lambic yeast blend, rather than the intense lambic strain I used initially for my pure lambic.

So far they seem to be progressing well. Soft and smushy, but not threatening to burst at the seams. Well see how they hold up to a taste test in another week or two!
SHARE SHARE SHARE

So how did they turn out?

The first one came out great, but the second rapidly turned over-ripe in the course of a week. Since then I've used less starter cultures when making raw milk cheeses, as the raw milk only needs a little push in the right bacterial direction. I've been thinking of trying this again, as the first one did have a nice pungent, fruity flavor, like affidelice.

So if I understood well your newer attempt is the one we can see in your article of August 17th?

I'm French and I moved to the US five months ago. I grew up in Auvergne and of course I'm totally cheese deprived. My husband is obsessed with Mont d'Or so we've tried to make our own cheese with no real recipe. We can't find anything on French websites, blogs or forums. I guess that in France we're obsessed with protecting our food and traditions or as we already have good stuff we don't need to make our own. So we're basically experimenting. We added some B linens, geotrichum and some cultured buttermilk before the rennet. It's been two weeks and little has happened except some blue mold that smells and tastes really bad. So we washed them once with a bit of vinegar brine. So far it seems to work but they look like they're never gonna be runny and gooey. We don't have a cave but just a fridge that's not humid enough, that must be the problem. The only positive thing is that they do taste like Mont d'Or near their DIY loose spruce bark. What would you suggest to make them runny?

The culture mix your using sounds right. I use a prepared mixed called "PLA" by Danisco (you can get it through the Glengarry Cheese making site) that's been the most successful for me.

As far as the cheese being creamy, I've come to the conclusion that you'll get your best results with high humidity. Since these cheeses are so small, they don't have a lot of moisture to spare, so if they dry out from the air, they'll never get creamy.

You can try to get around this by putting them in a tupperware container with the lid slightly ajar. That will help keep a moist environment close to the cheese. It's ok if you see moisture droplets on the walls of the tupperware, but just don't let the cheese sit in a little pool of water.

I've also tried putting the cheeses in loose fitting plastic bags, which had mixed results. It kept the cheese very moist, but smeared the rind everywhere. It would probably work if you were a bit gentler than I.

Thanks for your help!