This is another new cheese I've been fiddling with. I really love goat's milk cheeses, but rarely have access to much goat's milk to make my own. When Carla picked me up a gallon of raw goat's 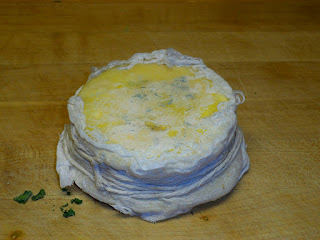 milk and a gallon of raw cow's milk, I decided to make one medium sized cheese out of both animal milks, rather than two tiny, separate cheeses.

Like my last post, this cheese is also uncooked and unpressed in an attempt to preserve the unique flavors of the raw milk. After they cheese had drained for about 24 hours, I let it air dry, at which point it started to smush out into a flattened pancake. I'm not sure if this is from the cultures I used acting oddly with the goat's milk, or my own fault for not working out enough whey before putting the curds to drain. To keep the 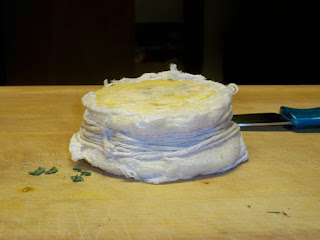 cheese together, I bound it in a little corset of cheese cloth. Two loops of string helped to put the cheese back to it's original form, but you can see it's a bit lopsided in the side photo.

It kind of remind me of those wildly rustic cheeses of the Iberian Peninsula, which have a hard, leathery rind, a gooey pocket of innards, and a cloth cinch around their waist. I don't think this one will be runny on the inside, however, as I think most of those cheeses (Serra da Estrela, Azeitao, Torta del Caesar) are set with thistle rennet, which breaks down into a hot mess at the center.
SHARE SHARE SHARE