If I had to spend my days only eating one cheese, it would be Gruyere de Comte. Hopefully one that had some nice age on it, but still maintained that characteristic nutty/savory flavor I love with only a tinge of cellar-funk earthiness echoing on the finish. Comte is a cheese that never 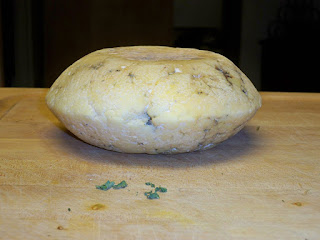 disappoints me, whether I'm nibbling it as a snack or melting it on a potato.

That being said, most of my hard homemade cheeses have been of a Comte-esque style. I heat the curds to about 110 F to firm up the curds, then press the curds under modestly heavy weights for a dry, elastic cheese. This has made some nice cheeses, but I wanted to get a better feel for each step of the process. So I removed the process and made the most basic hard cheese possible.

When I took Artisanal's Master Class on cheese, I was amazed to see that the odd, spherical shape of such famous English cheeses as Spenwood, Berkswell, and Wyfe of Bath were from being drained in colanders. Pasta colanders! Apparently colanders are traditional, since cheesemaking was a homefront skill and you made do with what you had on hand. 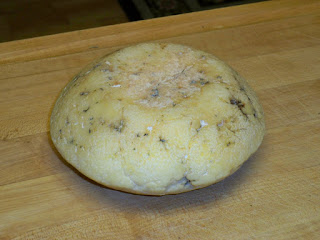 So this is my first attempt at that style of cheese. After cutting the curds, I stirred them to firm up the curds, then drained the whole mess in a pasta colander lined with cheese cloth. Once the curds had dripped off most of the whey, I flipped the cheese to drain the other side. Once the whey draining slowed, I broke up the curds and mixed in salt to wick off more moisture. The flipping and draining then continued for about 36 hours, until I had a (somewhat) firm cheese. I let it air dry for another night, then added a dusting of salt to the rind and put it into the cheese fridge.

Along with not pressing this cheese, I didn't heat the curds, which should give a better representation of the raw milk's flavor. I'm hoping for something between "farmy" and "barnyard," but I'd be happy with "grassy."

The one downside is that not pressing the cheese allows these little dimples to stay in the rind. Pressing would smooth them out, but we're past that point. The small crevices allow mold to grow within the rind. It's not a bad thing, as it mostly seems to be the penicillium candidium from my aging Brie, and a bit of harmless blue mold. But it is a twist in my stocking, so to speak.