Last weekend Carla went away, so I used my free time to indulge in the manly summertime tradition of smoking a pig's head. The pig head has been in our freezer since this past winter (yes, it made the move with us to our new place!), and really needed some attention. Remembering how good my last (and first) batch of scrapple came out, I decided to cook up another batch. 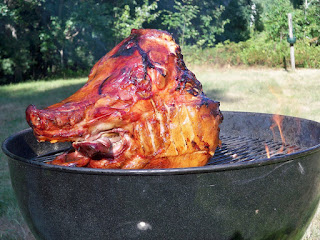 Here in Pennsylvania, you see a lot of scrapple made with buckwheat, which I don't like because of the gummy, mushy texture. So I again chose cornmeal as the binder. That first batch was made with the head of a rotisserie bbq'd/smoked pig. I like the slight smokiness the head meat gave the scrapple, but wanted to bring that smokey flavor to the forefront. Also, as Carla informed me she wouldn't be joining me in my scrapple-fest, I added some diced chiles for a bit of heat.
The smoking itself was very straightforward; over low, indirect head for the better part of the day. I primarily used mesquite chips, as they bring an unmatched smokey, epazote-like intensity to anything they waft over. 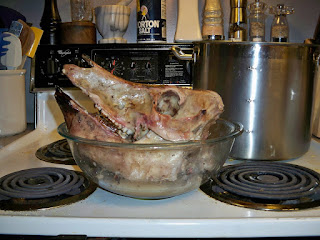 Once the piggy was fall-off-the-skull tender, I put it into the largest pot I had and simmered it for about three hours. The head was alone for the first two hours, then I added some stock veggies for the last hour. This gave me a rustic pork and mesquite broth for reconstituting my polenta. As the broth came back to a boil, I picked the meat off the skull and chopped it roughly into bite-sized pieces. An onion, some garlic, and thyme completed my seasonings. In a separate pot (as I had more broth than I needed) I boiled the polenta until it became thick and viscous, then stirred in the chopped pork and seasonings. And voila!
After being chilled overnight in loaf pans, the scrapple was ready for breakfast. Sliced thickly like toast, seared in butter like a pancake, and you're ready to go! Add some scrambled eggs and you have the breakfast of champions! It might be more work than I usually put towards breakfast, but it certainly paid off.
SHARE SHARE SHARE